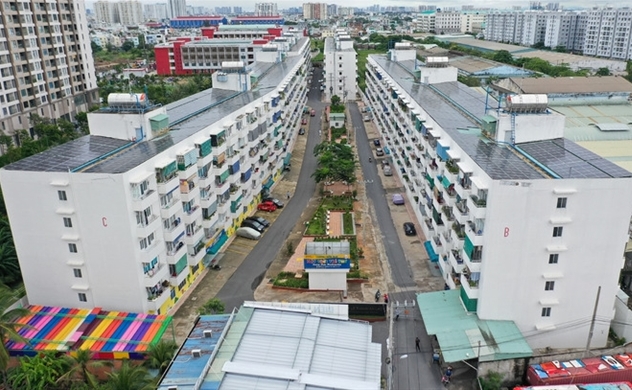 Despite various tax and loan benefits, developers say returns from building social housing are too low while procedures are tortuous.

In a document he sent to the 2022 Vietnam Socio-economic Forum on Sunday, Le Huu Nghia, director of the Le Thanh commerce and construction company, listed the multiple hurdles it has to overcome to develop a social housing project.

The company has already built around 4,330 units for rent, mostly in Ho Chi Minh City.

Citing the 2014 Law on Housing, Nghia said notionally certain fees and taxes are waived or reduced, and loans and other forms of financial support are provided to developers, but in reality things are not as they seem.

Developers also find it difficult to access funds since the government earmarks little for these projects, and so businesses often have to borrow from banks at much as 11% interest, he said.

Infrastructure around social housing projects also gets little support from local authorities, meaning businesses often have to fund it themselves, which drives up costs and makes the final prices unattractive, he pointed out.

Besides the low returns that dissuade developers, the fact that it takes around five years to complete procedures is also a big turn-off, he said.

"If the profit is 10%, it means it is 2% a year. That is too low, even lower than the bank savings interest rate."

Nguyen Dinh Khang, head of the Vietnam General Confederation of Labor, admitted that it is difficult to secure funds for construction of social housing.

He wanted more support policies for people eligible for social housing, enabling them to get loans on easy terms.

Many workers still live in dilapidated homes, and though landlords try to help, their efforts are spontaneous and not properly coordinated.

A report by the ministry said there are 310 urban social housing projects in the country with 156,000 homes, while another 401 are under development with 455,000 homes.