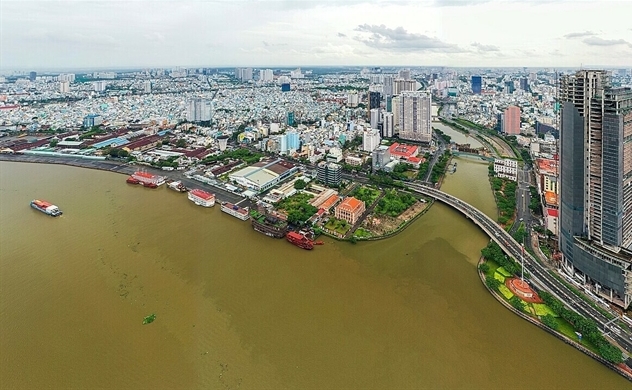 Buildings in HCMC's District 4 at the area near Khanh Hoi Bridge that connects it with the central District 1, August 2020. Photo by VnExpress/Toan Vuong.

Ho Chi MInh City will not allow construction of high-rises in seven districts if there are no plans for corresponding technical and social infrastructure.

Districts 1 and 3 are the heart of the biggest city in Vietnam. The districts and the remaining five have seen their population drop in the past decade.

According to the municipal construction department, which will execute the plan, the city’s decision to limit high-rise buildings in the seven districts comes from the fact that the demand for multi-storied buildings for condo projects is huge, but the infrastructure in many areas is inadequate. In these areas, the infrastructure and utilities system has been overloaded.

Deputies of the city People’s Council, the municipal legislature, have raised this concern over the years.

They have observed that the high-rise buildings, usually a complex of condo projects, shopping malls and offices, have drawn way too many people to gather in the inner city, worsening traffic jams.

For example, in less than five years, a section little more than two kilometers (1.24 miles) long on Ben Van Don Street in District 4, which neighbors District 1, has seen as many as 12 high-rise condo projects and shopping malls with tens of thousands of square meters of condo housing and office space for lease.