Anti-flooding projects expected to come into operation by October 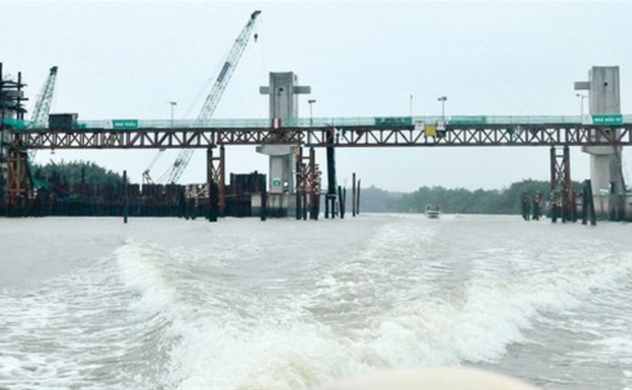 Ho Chi Minh City People’s Committee was urged to hand over premises to complete anti-flooding projects so that these projects will be put into operation by October.

Deputy Minister Nguyen Hoang Hiep, Standing Deputy Chairman of the city People’s Committee Le Thanh Liem and representatives from state competent agencies yesterday made a tour to inspect the progress of anti-flooding projects in the city.

The delegation first toured District 7 to examine a culvert project and then they traveled to Nha Be and Binh Chanh districts to oversee sluice gates and embankment projects in the two districts.

Director of the developer, Trung Nam Group, Nguyen Tam Tien said that around 80 percent of the construction works has been completed; the remaining is installment of equipment such as valve.

Apart from these culverts, the management center and system for supervisory control and data acquisition (SCADA) has been piloted. Workers have installed valves of the sewer systems Ben Nghe, Phu Dinh, Muong Chuoi, Cay Kho and Tan Thuan.

According to Director Nguyen Tam Tien, site clearance is the biggest problem at present. For instance, at the Muong Chuoi culvert, workers are building culvert and supporting works yet more than ten households in the area have not agreed to hand over land though the investor has given compensation to households and organizations affected by the project, said Mr. Tien.

He added that only when Nha Be District administration hands over cleared site in June, the project can be finished as per schedule. Worse, the work is facing hiccup because of the port construction of the Southern Air Petroleum Warehouse Company meanwhile construction of Cay Kho in Binh Chanh District is sluggish (just 70 percent of the construction works has been completed) due to site clearance hindrance.

Deputy Chairman Le Thanh Liem urged local administration to hand over cleared site as quickly as possible so that the investor can finish it as per set schedule.