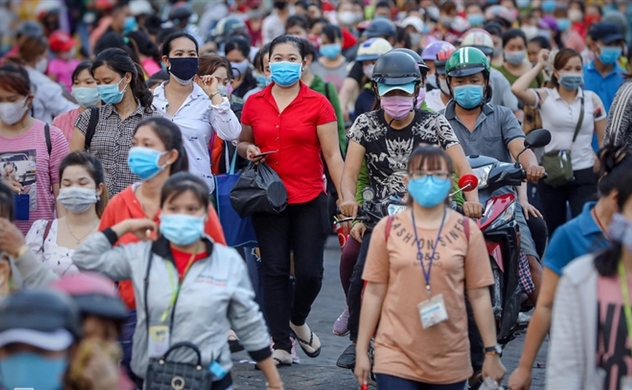 The contract termination takes effect on August 5. For the 45 days from the layoff date, the workers do not have to come to work, but will be entitled to their salary.

New orders have been dwindling since March, said Cu Phat Nghiep, trade union chairman at Pouyuen Vietnam, which is based in Ho Chi Minh City’s Binh Tan District and is the city’s largest employer with a worker strength of over 65,000.

New orders for June have fallen 50 percent year-on-year, and while this has gradually increased for July, August and September, the company has nothing for the fourth quarter yet, Nghiep said.

Earlier, the company had planned to let go of around 6,000 employees, but decided to halve this number upon reconsideration.

Do Dinh Thien, vice chairman of Binh Tan District's people's committee, said by Saturday morning, after talks with the company's management, the majority of workers agreed to sign the contract termination agreements. "The severance pay is higher than that regulated by the government, so many workers are happy."

However, a number of workers asked for an exemption of 10 percent personal income tax on the severance pay. Binh Tan District has reported their proposal to HCMC's People's Committee and the municipal department, Thien added.

More than five million Vietnamese workers have either lost their jobs, worked fewer hours or had their incomes reduced because of the novel coronavirus outbreak in the first five months of 2020, the Ministry of Labor, Invalids and Social Affairs, said.

A survey conducted by the ministry found nearly 86 percent of Vietnamese enterprises affected by the pandemic, especially those in manufacturing and processing, wholesale, retail, logistics, catering and hospitality.

Vietnam recorded a first-quarter GDP growth of 3.82 percent, the lowest in a decade. As many as 18,600 companies temporarily suspended business during this period, up 26 percent year-on-year.

Last year, the nation grew 7.02 percent, the second highest rate in a decade. The government had revised its GDP growth target to 4.5-5.4 percent for this year, but the parliament last week agreed that the country will keep its original annual target of 6.8 percent.