40 new Covid-19 cases, one death reported in a single day in Vietnam 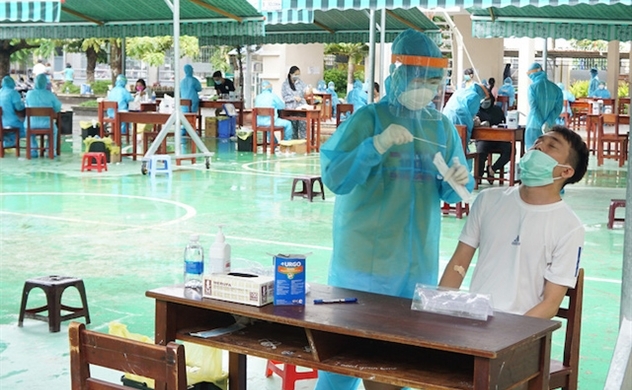 The country has reported three deaths related to Covid-19 over the past two days. Photo: NDH.vn

Vietnam has confirmed 28 new Covid-19 cases on Saturday evening with 12 cases and a third death reported on the same day’s morning, raising total new infections in a day to 40.

With the new cases, the country’s patient tally has risen to 586, according to the National Steering Committee for Covid-19 Prevention and Control.

The latest patients include 19 cases linked to the Da Nang General Hospital and two imported cases.

Specifically, patients numbered 559 and 560 were among passengers onboard the flight VJ2432 from Indonesia to Can Tho on July 29.

The pair are being quarantined and treated at  the Tuberculosis and Lung Disease Hospital in the Mekong Delta province of Tra Vinh.

Patients numbered 561 to 565, aged between 19-75, are from the central province of Quang Nam and all linked to the Da Nang General Hospital.

Patient 566 is from the northern province of Thai Binh, who had been in close contact with patient 522 in Da Nang General Hospital.

Patients 567-568 are from Ho Chi Minh City, who took care of patients at the Da Nang General Hospital.

Both of them are being quarantined and treated at the Hospital for Tropical Diseases in Ho Chi Minh City.

Patients 569-586, aged between 9-86, are from Da Nang City. They include 11 linked to the Da Nang General Hospital and seven others are community infection cases in Hai Chau, Lien Chieu, Cam Le and Hoa Vang Districts.

The country has reported three deaths related to Covid-19 over the past two days. They are patients numbered 499, 437, and 428.

When the number of confirmed cases in Da Nang keeps increasing, the government of Da Nang has decided to test all of resident in the city.