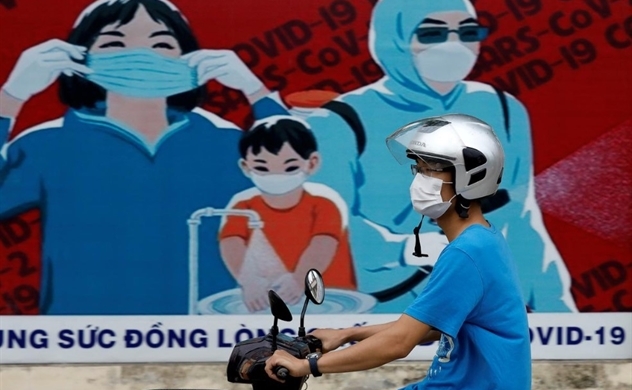 A man wears a protective mask as he drives past a banner promoting prevention against the coronavirus disease (COVID-19) in Hanoi, Vietnam July 31, 2020. REUTERS/Kham

Vietnam reported 12 additional novel coronavirus cases on Saturday, bringing the total number of infections in the country to 558.

The country marked the ninth day in a row with new infections, according to data from the National Steering Committee for COVID-19 Prevention and Control.

Among the 12 cases confirmed, five live Quang Nam and seven live in Da Nang, all linked to Da Nang Hospital. They were patients, relative of patients at the hospital.

During the past 24 hours, Vietnam had 94 new infections, including 68 domestic cases. Since the new outbreak began last week when a community infection recorded in Da Nang, the country has recorded 116 domestic infections, with two deaths on Friday alone. The patients had been under treatment for other chronic diseases in Da Nang Hospital.

The virus has been spreading to six cities and provinces, with 91 cases in Da Nang, 16 in neighboring province of Quang Nam, five in Ho Chi Minh City, two in Hanoi. Quang Ngai Province in the central region and Dak Lak Province in the Central Highlands got one each, VnExpress compiled data from health authorities.

As of Saturday morning, Vietnam has recorded 558 Covid-19 cases, including 193 active patients after 373 have recovered. More than 91,000 are in quarantine in the nation.