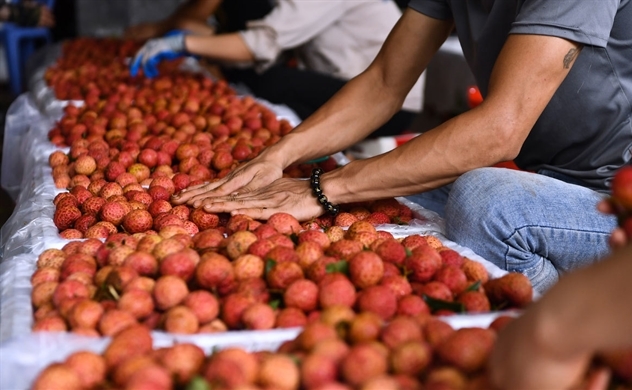 Farmers prepare lychee for exports in the northern province of Bac Giang in June 2020. Photo by VnExpress/Giang Huy.

The Regional Comprehensive Economic Partnership will give the Vietnamese economy access to a further one-third of the world’s population and attendant opportunities for export growth.

The world’s largest trade pact involving 15 countries in the Asia Pacific, which has been negotiated since 2013, is set to be signed online on Sunday.

Its members comprise the 10 ASEAN member countries and Australia, China, Japan, New Zealand, and South Korea, who together account for 29 percent of the world’s GDP and a population of 2.2 billion.

"Major export categories we expect to benefit the most are telecommunications, information and communications technology, textiles, footwear, agriculture, and automobiles," he told VnExpress International.

Nguyen Thi Thu Trang of the Vietnam Chamber of Commerce and Industry said the pact is set to increase Vietnam’s exports since many of the other members have high demand for Vietnamese tropical produce and processed foods.

It would help Vietnam strengthen its smart phone, electronics, textile, and footwear supply chains, she said.

It would open new opportunities for trade with China and other developed countries in new categories such as communications, financial services, logistics, and e-commerce, he said.

Robert Tran, CEO of U.S. investment consulting firm RBNC in charge of North America and the Asia Pacific, said the more free trade agreements Vietnam is able to sign the more trade advantage it would get.

The RCEP would help Vietnam increase its exports to the world’s most populated market, China.

But there are also concerns about the trade deal’s negative impacts on Vietnam.

Trang said Vietnamese exporters might have trouble competing with other Southeast Asian exporters, some of whom are strong in similar product categories.

Chinh said Vietnam could become a hub for transit of goods from the east to the west due to its low manufacturing added value.

Local e-commerce companies might be hurt on their own turf if big companies from other countries seek to grab a bigger market share in Vietnam, he added.

Other analysts said while the trade deal would increase competition at home for Vietnamese companies, they could take this opportunity to improve their products and supply chains.

Yek said: "The RCEP provides Vietnamese companies with better access to a larger market and also allows them to take advantage of technical cooperation with partners from advanced economies to improve their efficiency and product competitiveness to ultimately ascend the value chain."

Knowing how and being able to capitalize on the advantages provided by the deal would hold the key to reaping its benefits in the years to come, he added.

The signatories have to ratify the RCEP for it to take effect.