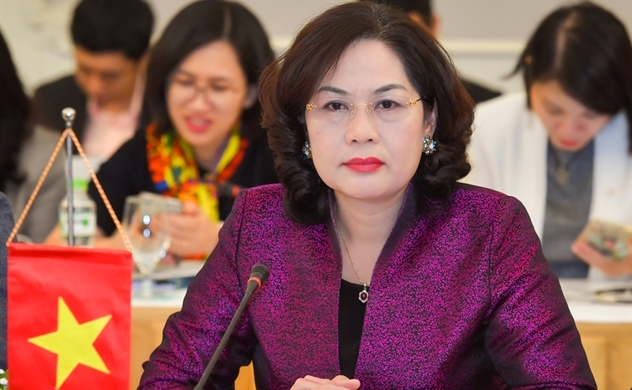 Vietnam’s first woman to become central bank governor has the expertise and experience, but she takes the helm at a tough time.

Experts are confident that given her background in monetary policy, the banking system will remain stable, but add that she will have to tackle some difficult tasks while ensuring macroeconomic stability and "being open to new ideas."

With the National Assembly’s appointment of Nguyen Thi Hong as State Bank of Vietnam (SBV) Governor on Thursday, she becomes one of 15 women holding the top job at central banks worldwide, along with chiefs of the European Central Bank (ECB), Russia, Malaysia, Ecuador and Cuba.

Hong has not just stormed a male bastion in Vietnam, she is a rarity in global banking as well.

The OMFIF Gender Balance Index in 2019 show that 80 percent of women in the banking industry hold senior positions, but only 32 percent are assigned the position of deputy governor, and only 8 percent become Governor, or the head of a country’s central bank.

Monetary policy, the primary task of a central bank, is expected to remain stable under Hong, contributing in turn to maintaining macroeconomic stability.

Hong has decades of experience in the field. She started working at the SBV in January 1991 at the Foreign Exchange Management Department. She then transferred to the banks’ Monetary Policy Department as its deputy director, and later, the director.

After six years as deputy governor under former governors Nguyen Van Binh and Le Minh Hung, Hong, according to the president of a local bank who did not wish to be named, is said to have "mastered her area of expertise and has given core advice regarding important SBV policies for a long time."

However, Hong has taken over the central bank’s stewardship at a difficult time. In the short term, monetary policy could come under pressure with the U.S. continuously sending out messages alleging that the dong is undervalued. There is a risk of Vietnam being labeled a "currency manipulator," he said.

Some experts say this may in fact be a tool for the U.S. to pressure Vietnam into participating in its policies and positions like the free and open Indo-Pacific Strategy, or to support it in creating a counterbalance to China in the region.

As Director of Monetary Policy for many years and then Deputy Governor for six years, Hong is not only expected to adopt appropriate policies going forward, but also help Vietnam explain to the U.S. that it does not use exchange rates to create unfair trade advantages.

Vietnam's current account surplus is mainly due to remittances of dozens of billions of dollars every year regardless of the exchange rate. Vietnam has been a country with a low inflation rate in recent times, but it is still higher than many of its trading partners.

The U.S. Labor Department has measured inflation at 1.2 percent as of October, compared to Vietnam’s 2.47 percent for the same period. Therefore, the Vietnamese currency being devalued against the U.S. dollar is an understandable phenomenon, banking experts say.

Another major burden the 52-year-old governor will have to face is restructuring the banking system, in particular the plan to deal with zero-dong banks, which are loss-making lenders with negative assets that the SBV has had to buy up for zero dong.

In the meantime, since it does not have enough funds to reconstruct weak financial institutions, the State Bank and relevant agencies will focus on providing short-term capital.

With the project’s second phase (2016-2020) coming to an end, a new phase is being prepared by the central bank. However, achieving of its targets may prove difficult, like dealing with bad debts in weak banks. The new phase of the project is yet to be approved.

Furthermore, while the banking system’s internal non-performing loan ratio, as of August, was 1.96 percent, less than the annual target of 3 percent, the pressure on this ratio will continue to mount as restructured debts mature.

According to the chairman of a private bank in Ho Chi Minh City, this will be a tremendous task. "Restructuring a system in which bank chiefs are all hard, bloody men, will require a woman of steel, in addition to her expertise," he said.

Hong will also have to deal with other problems like the sharp rise in bad debt after Covid-19; and promoting credit growth so that it flows back into production and business without focusing on major risky areas like real estate.

The pressure to ensure the safety of banks' capital together with monitoring disclosure for the integration of Basel II standards, or other advanced international standards, for a healthier and more sustainable banking system, is also not a simple task, he added.

An expert and former advisor to the SBV told VnExpress that Hong will have a lot of work to do after taking office, and one of them is building and perfecting the whole operational quality of the central bank.

With Hong appointed Governor, the State Bank currently has three deputy governors, including Dao Minh Tu, Nguyen Kim Anh and Doan Thai Son. Tu and Anh are 54 and 56 years old respectively, and can retire this term. In other words, the State Bank is lacking both senior and middle-level leaders for many years to come and this will be another challenging task, he said.

The expectations of banking leaders in the country go higher than maintaining stability. They want the new governor to take on the task of promoting innovation even as Fintech increasingly blurs the lines between technology and finance.

In terms of sharing challenges with the current SBV chief, a former female deputy governor said what a governor always needs is "openness", the ability to welcome and receive new ideas and encouraging a high degree of integration.

Right now, despite all the talk about digital banking, if all transactions such as opening accounts and lending cannot be digitized, digital banking will not develop in Vietnam, she said.

Therefore, what banks expecting from the SBV under its new chief, are specific instructions for them to open online accounts for people, the legalization of e-lending as well as the implementation of correspondent banking and, ultimately, the Sandbox pilot mechanism for new systems, she added.

Becoming the first female Governor of the State Bank of history is a proud moment, no matter how challenging the task. But, with Hong’s long experience and understanding of the system as a whole, the banking industry is optimistic about seeing many positive developments during her tenure.