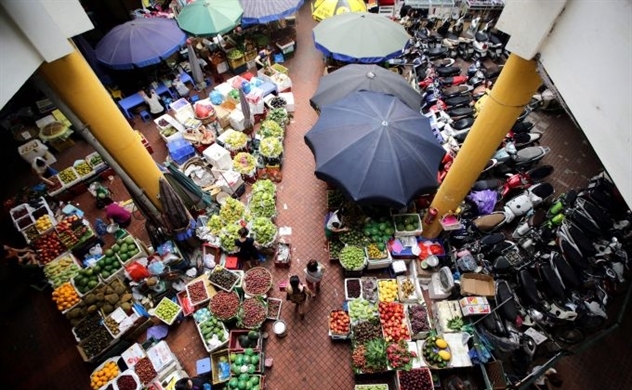 Vietnam's economic growth in 2020 is expected to slow to 1.6 percent. Photo: EPA

Vietnam is expected to surpass Singapore and Malaysia to become the fourth biggest economy in Southeast Asia in 2020, the International Monetary Fund said in its October report.

The Southeast Asian country's GDP in 2020 is estimated to reach $340.6 billion, exceeding Singapore with $337.5 billion and Malaysia with $336.3 billion. The organisation has forecast Vietnam’s 2020 GDP growth at 1.6 percent, while Singapore’s economy will contract 6 percent

According to the data, Vietnam will become the fourth largest economy in ASEAN this year, behind Indonesia, Thailand and the Philippines.

Vietnam continues to be the only country in Southeast Asia to have growth this year and in 2021, the economy will grow 6.7 percent. During the next five years, Vietnam’s GDP is set to jump by 6-7 percent annually, compared to Singapore’s 2-5 percent.

Having success in combatting coronavirus, Vietnam has become one of a few countries to have positive economic growth this year.

Vietnam’s GDP increased 2.12% during the first nine months of 2020, according to the General Statistics Office.

Speaking at the Cabinet meeting in early October, Prime Minister Nguyen Xuan Phuc called for more efforts to achieve GDP growth rate of 2.5-3 percent this year as V-shaped recovery is becoming clearer over the past months.

According to tradingeconomics.com, in the first half of 2020, Vietnam was the unique country among major economies in ASEAN posting positive economic growth (1.81%) while other nations announced negative economic growths including Malaysia (-16.5%), Singapore (-13.3%), Thailand (-9.7%), Indonesia (-4.19%) and the Philippines (-15.2%).

The country has gone almost a month and a half without new local Covid-19 infected cases.