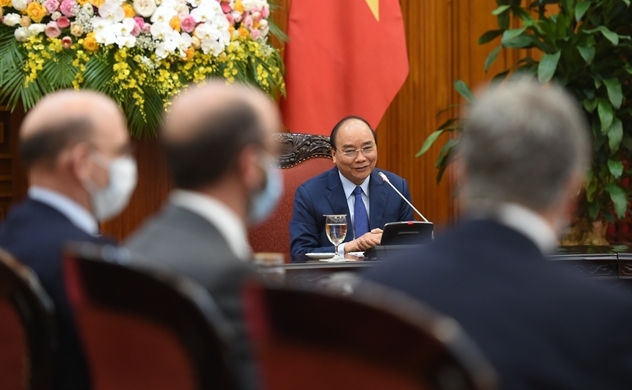 “If the Vietnam dong is devalued, it will seriously hurt the stability of the macroeconomy and the confidence of people and investors,” PM Phuc says. Photo: VGP / Quang Hieu

The Vietnamese premier made the statement after the US government announced to open a trade investigation into Vietnam’s currency policy to determine whether an undervalued dong hurts American businesses.

At the meeting with the high-level US delegation led by Adam Boehler, director general of US International Development Finance Corporation, PM Phuc stated that Vietnam's exchange rate policy is not intended to create international commercial advantage or support any manufacturing industry, according to a posting on Vietnam Government Portal.

“If the Vietnam dong is devalued, it will seriously hurt the stability of the macroeconomy and the confidence of people and investors,” PM Phuc said, adding Vietnam always sees the US one of its most important partners and wishes to continue developing a comprehensive partnership with the States.

Since the two countries restored relationship since 1995, bilateral trade has increased more than 170 times. US exports to Vietnam have reached the highest growth rate among Southeast Asian partners.

In terms of investment, several American enterprises are investing and doing business successfully in Vietnam. Currently, the US is among the 10 biggest investors in Vietnam, according to the posting.

PM Phuc encouraged US enterprises to strengthen investment in Vietnam in the context of supply chain shift in the region.

The State Bank of Vietnam operates the exchange rate policy within the framework of a general monetary policy to maintain macroeconomic stability.

The Prime Minister asked DFC director general to convey his message to President Donald Trump and the Trade Representative Agency that Vietnam wishes to implement the plan for trade balance agreed at the end of 2019.

► US administration to announce currency probe on Vietnam, Bloomberg says