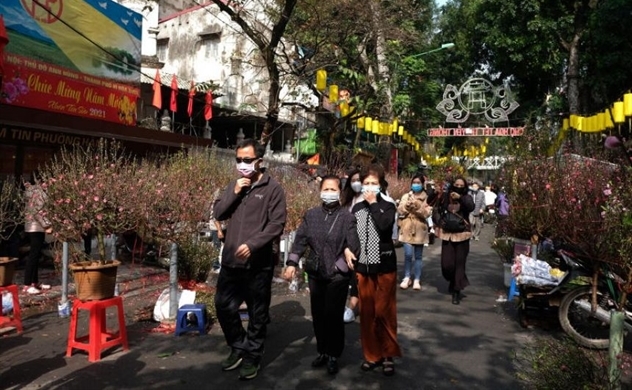 This quick control of the pandemic allowed Vietnam to reopen its economy.PHOTO: EPA-EFE

Vietnam's successful handling of Covid-19 has seen it register a positive growth rate, but many challenges to its economic expansion lie ahead.

To its neighbours, Vietnam is to be envied. The South-east Asian nation has done remarkably well economically despite being hit hard by the Covid-19 pandemic. It registered 2.9 per cent growth last year, the best performance in the region against its neighbours' largely negative growth rates.

A key reason for its achievement is that it dealt with the pandemic early and effectively, within days of China announcing its first cases, including mobilising Vietnam's 100 million citizens to help with detecting those infected and tracing contacts. Before the latest resurgence of infections last month, it had reported just over 1,500 cases and 35 deaths.

This quick control of the pandemic allowed it to reopen its economy by the end of April last year and focus on recovery.

While its tourism industry and service sector have been hit hard, and manufacturing was at first also badly affected, worldwide demand for IT and home improvement products, among other things, later burgeoned, spurred by lockdowns and people working and studying remotely. This surge in demand was a huge boost to Vietnam's export-oriented manufacturing sector.

Now analysts are saying this is Vietnam's breakout moment, and it should grasp the opportunities presented to it by its relatively successful handling of the pandemic.

One of the goals in its five-year economic development plan confirmed at the congress is the doubling of gross domestic product (GDP) by 2025 from last year's baseline.

And it has kept its longer-term goal of becoming a high-income country by 2045 from its current lower middle-income status.

Party general secretary Nguyen Phu Trong, elected to an unprecedented third term, said at the close of the eight-day meeting: "We aim to make our country a developed country, following the socialist orientation, by the middle of the 21st century."

It also wants more privatisation of its state-owned enterprises and to increase the share of private companies in the economy from the current 42 per cent to more than 50 per cent. Another key goal is to move up the value chain by attracting better-quality foreign direct investment.

While analysts are bullish about Vietnam's ability to continue growing and developing - even becoming the next Asian miracle - there are challenges to some of its ambitions, not least of which is the negative impact on the economy from a pandemic that has yet to run its course. Other problems include a shortage of highly skilled workers, a need for better infrastructure and inefficient state-owned firms.

There are also geopolitical issues, such as tensions with an increasingly assertive China over their competing territorial claims in the resource-rich South China Sea, that could negatively impact its economy.

Vietnam's economic success in the past three decades has been the result of the government's decision to introduce doi moi, or restoration - a series of economic and political reforms, in 1987.

This liberalised trade - with Vietnam joining the Asean free trade area in 1995, signing a free trade deal with the United States in 2000 and joining the World Trade Organisation in 2007 - facilitated its export-led growth.

Vietnam has since signed several more trade deals, including one with the European Union that came into effect last year, and also joined the 11-nation Comprehensive and Progressive Agreement for Trans-Pacific Partnership and the 15-nation Regional Comprehensive Economic Partnership.

Through domestic reforms, including deregulation, the government lowered the cost of doing business. It also invested heavily in education and infrastructure.

Helped by foreign firms looking for a cheaper alternative to China, Vietnam became a hub for manufacturing in South-east Asia, with apparel makers and electronic giants alike setting up factories there. By 2017, it became the largest exporter of clothing and second-largest exporter of electronic goods in the region.

Trade friction between the US and China further spurred firms to move some of their production from the Asian economic juggernaut to countries like Vietnam.

It was expected to grow by 6.5 per cent last year until Covid-19 hit.

Late last year, the government set a target of 6.5 per cent growth for this year, but Dr Le Hong Hiep, a fellow at the ISEAS - Yusof Ishak Institute, is doubtful that this is achievable.

This is particularly as there has been a resurgence of Covid-19 cases last month, putting a dampener on the shopping season for Tet, the Vietnamese new year that falls on Feb 12.

With Vietnam's economy also dependent on foreign trade and investment, its growth depends on how other countries manage the pandemic. Unless the pandemic is controlled worldwide in the summer, Dr Hiep reckoned that a 4 per cent to 5 per cent growth rate for Vietnam would be more realistic.

As for the target of doubling GDP by 2025, analysts are sceptical that it will be achieved, especially with the pandemic's negative impact. The economy would have to grow by 9 per cent or 10 per cent a year, a target that would be a bridge too far for the country.

While Vietnam has weathered the pandemic well, it faces challenges going forward, as its leaders admitted at the national congress.

"Our country is still facing several difficulties, challenges and shortcomings," said Mr Trong, adding: "The economy is not yet highly resilient and self-reliant, the efficiency of many state-owned enterprises is low and the growth of the private and foreign-invested sectors is not yet sustainable."

Despite efforts at privatisation, state-owned firms still make up nearly 30 per cent of economic output - the same number as a decade ago - and account for many of the bad loans in the banking system.

While the government wants more privatisation of state-owned firms, analysts believe this programme could be delayed.

Dr Hiep noted that the pace of privatisation had slowed since 2018 and basically stalled because the low-hanging fruit had been picked, with those companies that remain more difficult to privatise.

Mr John Marrett, a senior analyst with the Economist Intelligence Unit, questioned whether the government is prepared to continue with the privatisation programme before the dust has settled on a pandemic that has disrupted investments globally.

As the programme is in line with the government's intention to expand the private sector, which is more dynamic and efficient in using resources, Hanoi should come round to pushing it in due course. Analysts think that the goal of increasing the share of private companies to more than 50 per cent of the economy is feasible, depending on the measures rolled out to attract investments.

The government also wants to attract better-quality investment that would allow the country to move up the value chain into more productive and higher-earning areas, and to alleviate its pollution problems. Some of its industries, such as the apparel industry, are highly polluting. Much of its manufacturing is also low-end and labour-intensive. And while its tech sector is burgeoning, much of that activity is in product assembly with low value-add.

To move up the value chain, however, it would need to resolve some problems including the shortage of highly skilled workers.

Noting that higher education attainment is fairly low in Vietnam, Mr Marrett said the country needs to not only increase the number of university graduates but also broaden the scope of its higher education. Currently, its graduates are working mostly in public service, he added.

Another problem, he said, is the difficulty of transferring the foreign companies' technology and managerial skills to its own firms, workers and entrepreneurs.

Vietnam also needs to address its infrastructural shortcomings. The World Bank notes that the country's physical capital investment as a percentage of GDP has been among the lowest in Asean. This would affect Vietnam's ability to provide modern infrastructure services needed for its next phase of growth.

Already, Vietnam is expected to face power shortages in the next two or three years because of delays in the building of new power plants, noted Dr Hiep.

He also said that for Vietnam to be more self-reliant and to move up the value chain, it would need to grow the local sector, particularly in the high-tech area.

While analysts are confident that Vietnam is on an upward trajectory of growth, that pace is uncertain given the internal and external challenges.

The external environment of greater economic protectionism, particularly in the West, could affect its export-led growth.

Geopolitically, its own tensions with China and the increasing rivalry between China and the US in the region could affect the confidence of investors.

How Vietnam's leaders - particularly the new government that is expected to be installed in July - tackle these challenges within the country and navigate the uncertain waters of the region will determine how well it will succeed in realising its ambitious economic goals.