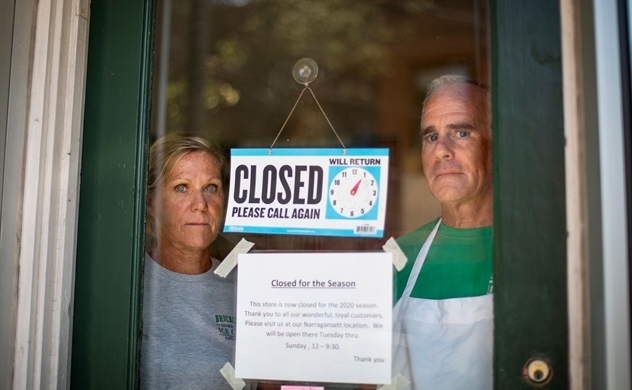 A surge in coronavirus infections since mid-June appears to be slowing the recovery in some states. PHOTO: DAVID GOLDMAN/ASSOCIATED PRESS

The Commerce Department’s initial estimate of U.S. gross domestic product in the second quarter is the steepest drop in more than 70 years.

The economy contracted at a record rate last quarter and July setbacks for the jobs market added to signs of a slowing recovery as the country faces a summer surge in coronavirus infections.

The Commerce Department said U.S. gross domestic product—the value of all goods and services produced across the economy—fell at a seasonally and inflation adjusted 32.9% annual rate in the second quarter, or a 9.5% drop compared with the prior quarter. The figures were the steepest declines in more than 70 years of record-keeping.

“We’re expecting a longer and slower climb from the bottom unfortunately, and here the virus will dictate the terms,” Beth Ann Bovino, U.S. chief economist at S&P Global Ratings, said.

Stock markets fell after the figures on output and the labor market provided an updated picture of the pandemic’s damage to the economy.

The second-quarter economic contraction came as states imposed lockdowns in March and April to contain the coronavirus pandemic—triggering a steep drop in output—and then lifted restrictions in May and June—allowing growth to resume.

Gains later in the second quarter weren’t enough to offset April’s steep drop, however. Economists expect the third quarter, which began on July 1, to show growth, though the summer rise in infections is likely to temper gains.

“The ball is going to bounce less high than it should” in the third quarter, said James Sweeney, chief economist for Credit Suisse, as with new virus outbreaks, “we know there is an incremental slowing down of economic activity.”

Private high-frequency data show “that the pace of the recovery looks like it has slowed since the cases began that spike in June,” Federal Reserve Chairman Jerome Powell said Wednesday, noting declining measures of debit- and credit-card spending, flattening hotel occupancy rates and fewer restaurant and salon visits.

The decline in GDP in the second quarter reflected the deep hit to consumer and business spending from lockdowns, social distancing and other initiatives aimed at containing the virus. Consumer spending fell at a 34.6% annual rate, amid sharp decreases in spending on services like health care, recreation and food.

Business spending on software, research and development, equipment and structures fell at a 27% annual rate. Both exports and imports plummeted. Spending by the federal government rose as it paid out fiscal stimulus checks and supplemental unemployment benefits.