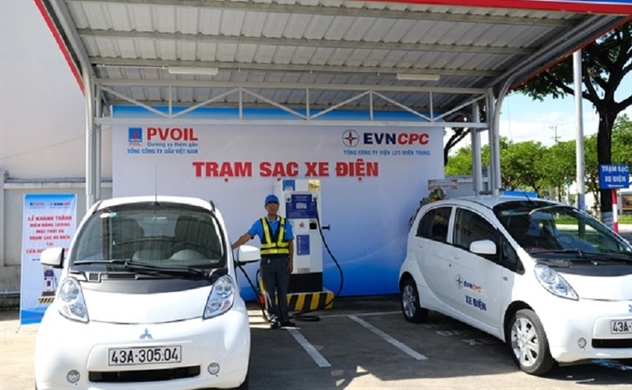 Vietnam Oil & Gas Group’s subsidiary PVOIL has become the first petroleum retailer in Vietnam to introduce charging stations for electric cars, the company said in a posting on its website.

The facilities which were put into operation on Thursday in the city requires customers about 20 to 30 minutes for a full charge depending on cars and battery.

The corporation is conducting a pilot program using a combination between traditional petroleum station and a modern electric car charging station. The solar power system is installed on the roof of the existing station.

PVOIL is expected to build similar station nationwide. PVOIL, which has more than 3,000 petroleum stations in the country, will be the pioneer in building infrastructure for electric vehicles in the future, said Le Xuan Trinh, deputy general director of PVOIL.

Like purchasing petroleum at PVOIL petroleum station, customers who charge their car at the station can procced payment by scanning QR code on Mobile Banking apps that have connection with VNPay.

► VinFast test runs electric car for launch at US show