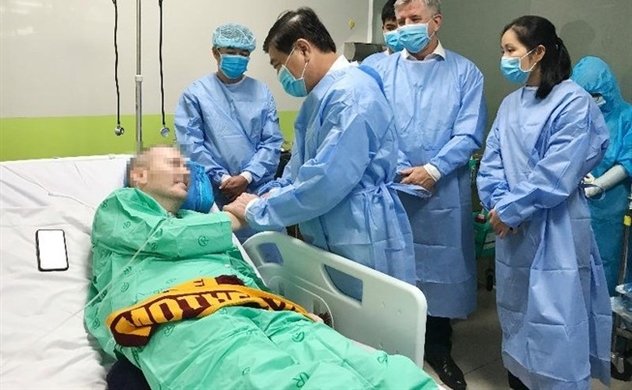 A British pilot in Vietnam stricken with COVID-19 who at one point seemed close to death has almost fully recovered and is in a position to be discharged from hospital.

The case of Stephen Cameron has attracted national attention in Vietnam, where a combination of targeted testing and aggressive quarantine has kept its coronavirus tally to an impressively low 335 cases, and zero deaths.

“The patient can leave now, but the most important thing is that he practises physical therapy,” said Luong Ngoc Khue, a health ministry official, according to a government Statement.

The 43-year-old Scot arrived in Vietnam from Britain in early March to work for Vietnam Airlines, according to state media. He was one of 19 people who visited a bar in Ho Chi Minh City on March 13 where a cluster of coronavirus cases was discovered, and was initially identified as “Patient 91”.

On March 17, he piloted his first flight for Vietnam Airlines to Hanoi, the capital. Three days later, he was hospitalised with COVID-19 symptoms.

By early April, Cameron was on a ventilator and life support machine at Ho Chi Minh City’s Hospital of Tropical Diseases. In May, medical officials said the disease had reduced his lung capacity to 10% and that he urgently needed a lung transplant.

With the vast majority of Vietnam’s COVID-19 patients already recovered, the news of a potential first death prompted a national outpouring of support, with dozens of people coming forward as potential lung donors.

Weeks later, however, Cameron regained consciousness after his condition began to improve. He was taken off life support and will soon no longer require assistance from a ventilator to breathe, according to state media, and he no longer needs a lung transplant, said Luong Ngoc Khue.

In footage released on Wednesday, Cameron could be seen posing with a yellow and red Motherwell Football Club scarf as he met local officials and a British diplomat.