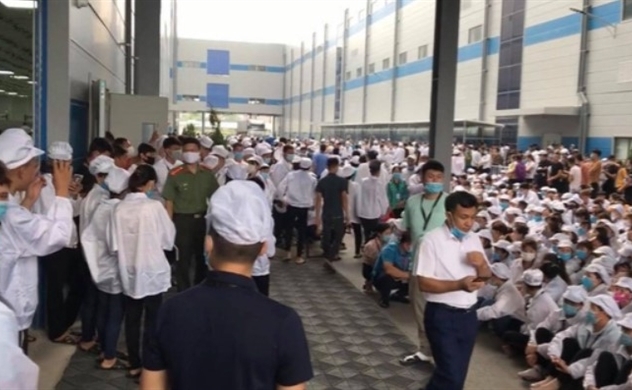 AirPods maker Luxshare-ICT in Bac Giang has pledged to address demands raised by its workers after strikes over the weekend accusing the company of failing to ensure their rights and benefits.

Luxshare-ICT, an assembler of Apple’s AirPods wireless earphones, hires about 27,000 laborers working on four shifts every day at its fatory in Bac Giang’s Viet Yen District.

Many workers of Luxshare-ICT were recently dissatisfied with the AirPods manufacturer as several of their rights and benefits were not met.

Specifically, the workers accused the company of failing to make payments for overtime wages and benefits, annual leave, hazard pay, and salary during the break time due to the COVID-19 pandemic.

The dispute gained public attention last week when a total of about 5,000 workers of Luxshare-ICT went on strike on Friday evening and Saturday morning.

The company made three consecutive announcements to address the issue. By 3:00 pm on Saturday, all the workers had returned to their work.

However, the tension between the two sides emerged again later the same day when some of about 3,000 workers who worked on the Saturday night shift, still dissatisfied with the company’s proposed resolutions, were involved in a scuffle.

A worker had to be hospitalized following the incident.

In order to help address the dispute, a task force led by Viet Yen District’s chairman Nguyen Van Dung worked with Luxshare-ICT’s leaders and the representatives of the workers on Sunday afternoon.

In a fourth announcement released on Monday morning, the company pledged to review and pay all unsettled salaries, including wages for last Friday and Saturday when the workers refused to work, before September 20.

The firm also promised to make correct records of the employees’ actual working times and correctly implement annual leave policies, along with monthly bonuses for those having a good performance.

Luxshare-ICT will also ensure that its foreign managers behave in a composed and respectful manner toward the workers.

Other demands such as hazard pay, meal allowances, and maternity benefits will also be met, the company’s general director Lee Cheng Ju affirmed.