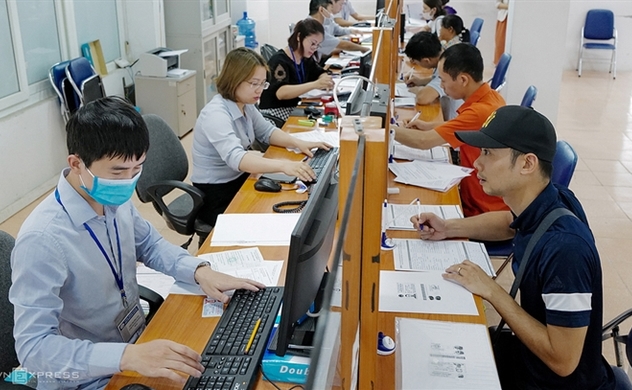 People file for unemployment at the Hanoi Center for Employment Services (HCES) on June 11, 2020. Photo by VnExpress/Ngoc Thanh.

The GSO attributed the surge in unemployment rate to the economic impacts of the Covid-19 pandemic.

The GSO calculated the labor force participation rate for the first half of the year at 73.8 percent, down 2.8 percentage points year-on-year.

The average monthly income recorded in the second quarter was VND6.3 million ($273), down 2.78 percent year-on-year.

Meanwhile, the average monthly income of workers in the first six months was VND6.7 million ($290), down 0.16 percent compared to the same period last year.

The number of people receiving unemployment benefits in the country in the first half of the year rose 32 percent year-on-year to 565,000. The government has paid VND7 trillion ($300 million) in benefits, a 40 percent increase, the GSO said.

Reflecting the economic downturn, the number of businesses temporarily suspending operations in H1 2020 went up 38.2 percent year on year to 29,200.

There are about 760,000 businesses operating in the country and Vietnam had targeted taking this up to a million this year.