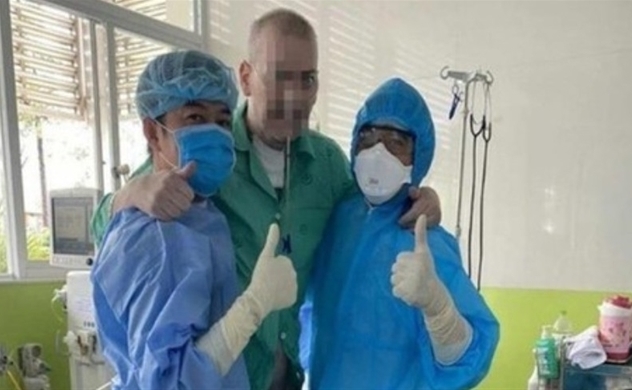 The patient (C) is able to communicate well.

The country's leading tour operator has expressed an interest in contributing to efforts to help repatriate a British novel coronavirus patient once he makes a full recovery.

Pham Huy Binh, chairman of the Board of Members of Saigontourist Group, said the company is prepared to collaborate with relevant authorities in order to fulfill the patient’s desire to return to his native Scotland after making a sufficient recovery.

Saigontourist is willing to assist the patient by covering all expenses relating to his air tickets and other transportation costs in order to fulfill the patient's wishes, said Binh.

He emphasized that through their support, the company hopes to share the burden with the local health sector in terms of COVID-19 prevention and control activities, as well as contributing to boosting the country’s image as both a safe and friendly destination to international friends and tourists around the globe.

The National Treatment Sub-committee will hold a consultation before transferring the patient to the rehabilitation department. When he is deemed well enough to leave the intensive care unit, the hospital will move to speed up procedures in order to discharge the patient and allow him to return to his homeland.

The British patient, the most critically ill case in Vietnam, was confirmed on March 18 to have contracted the SARS-CoV-2 virus that causes the COVID-19 disease. He had fallen into a coma for more than 2 months before staying conscious recently.

He has since then gone on to make a miraculous recovery and doctors said he does not need a lung transplant – an option that doctors had considered to save his life.

The patient is fully conscious and is able to communicate well, while his renal, cardiac, and hepatic functions have all undergone vast improvements, in addition to his pancreatic enzymes returning to normal.

Furthermore, his ability to move has gotten better, with the patient now able to get up and turn around in bed along with roughly four fifths of his leg muscles recovering after receiving physical therapy twice a day, doctors said. Despite these positives, he still needs time in order to regain the use of his leg muscles and make a complete recovery.

The patient’s latest CT scan indicates that his lung volume has returned to 90% of their original capacity.

The latest positive development indicates that the recovery of the patient’s leg muscles is almost complete and has happened at a rate faster than expected, with doctors previously believing that it would take him many weeks to be able to recover the majority of his motor functions.

The British national, who is employed by Vietnam Airlines as a pilot, has been hospitalised for the past three months since he was originally infected with COVID-19 on March 18.

When originally hospitalised the patient was in a healthy state, although his condition suddenly worsened with his lung capacity dropping rapidly, forcing him to require the aid of the extracorporeal membrane oxygenation machine ECMO from April 6.

Since this point however his overall health has improved drastically and he is now well on the way to making a full miraculous recovery. He shared with doctors his desire to leave the hospital soon to return home, adding that he is keen to return to his native Scotland.

The 43-year-old patient had been receiving treatment at the Ho Chi Minh City Hospital of Tropical Diseases for a total 65 days, before being transferred to the city’s Cho Ray hospital on May 22.

He remains the country’s most critical COVID-19 patient and has spent the longest time receiving treatment at medical facilities for a combined total of 93 days.