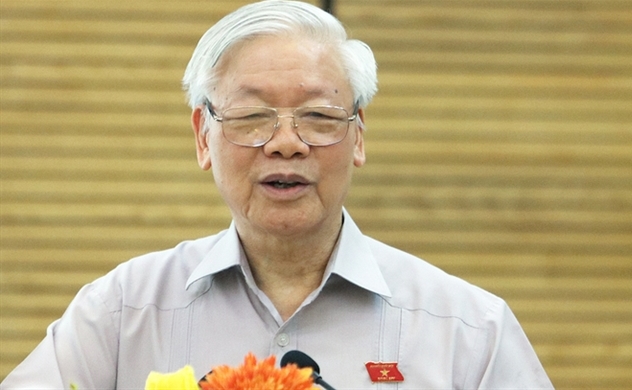 In the meeting, Party chief Nguyen Phu Trong, 77, was re-elected for another five-year term, the third in a row.

He was re-elected Saturday to the 13th Communist Party Central Committee, which includes 180 official and 20 alternate members.

He became General Secretary of the Party Central Committee in 2011, and was re-elected to the position in 2016.

Nguyen Phu Trong, born in 1944 in Hanoi’s Dong Anh District, joined the Communist Party in 1967 and holds a Ph.D degree in politics and a bachelor degree in literature.

In October 2018, he was elected as State President. He was Chairman of the National Assembly in the 11th and 12th tenures.

Trong has also been Secretary of the Central Military Commission and Head of the Central Steering Committee on Corruption Prevention and Control. He was a member of the National Assembly in the 11th, 12th, 13th and 14 tenures.

The 13th Party Congress, the nation’s premier political event, opened last Tuesday. It will select Party, State, Government and National Assembly leaders for the next five years, besides finalizing socio-economic development policies for the 2021-25 period and orientations until 2030 with a vision towards 2045.

The congress has attracted the highest participation so far, with 1,587 delegates representing 5.1 million Party members from across the country.