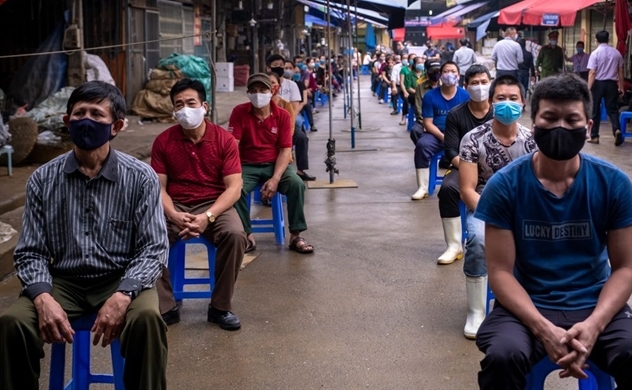 Workers from Long Bien market line up to be tested for Covid-19 in Hanoi, April 2020. Photographer: Linh Pham/Getty Images

Vietnam beat back its first wave of coronavirus infections by embracing U.S.-supported pandemic strategies that the Trump administration largely ignored.

Now the Southeast Asian country is using the plan to combat its first cases in more than three months, seeking to keep its record as one of the few places in the world that hasn’t reported a single Covid-19 death as of this week.

Even before Vietnam confirmed its first cases in late January, Prime Minister Nguyen Xuan Phuc ordered officials to break out the blueprint developed in 2014 during a global health security project, funded in part by US-AID and created with the U.S.

Centers for Disease Control and Prevention and other organizations. Strict adherence to the plan allowed the country to claim victory over the virus this spring, stamping out clusters.

Faced with a resurgence that has similarly confounded Japan, Hong Kong and Australia, Vietnamese authorities are moving to contain a fresh cluster that has led to 36 new cases in the past week, for a total of 459 cases as of Thursday morning.

Officials imposed strict quarantines on thousands of people who may have been exposed in the coastal city of Danang, reimposed stay-at-home measures and tightened border and immigration controls to prevent illegal entry. The government is now warning the virus could spread to other regions, including Ho Chi Minh City and the capital of Hanoi, where officials are suspending large gatherings such as religious activities and ordering bars to close.

“The CDC has been working with us and helped us build up a plan that put in place steps to fight against pandemics,” said Tran Dac Phu, senior adviser at the Public Health Emergency Operations Center under the nation’s Ministry of Health. “The government is now very concerned about a second wave. We continue to work with the CDC and World Health Organization on this.”

Key to the government’s success so far has been its ability to move quickly to test patients, isolate those who are sick, aggressively trace contacts and quarantine for 14 days those who come in contact with positive cases. It’s also been essential to have consistent and transparent communication with the public, said Dr. Matthew Moore, director of the CDC’s Global Health Security Program in Vietnam.

The agency, which has been in Vietnam for 20 years and has a staff of 58 in the country including eight Americans, works with the government on testing protocols, guidelines to prevent transmission in health-care settings and training in epidemiology.

“Time and time again they have shut down chains of transmission,” he said.

Vietnam’s success has been globally lauded. The U.S., meanwhile, has surpassed 4.3 million cases and 149,000 deaths while President Donald Trump has consistently downplayed the spread of the virus. Rather than following the advice of the experts, in July he retweeted a post claiming the CDC was lying about the virus.

There have been dramatic differences between how Vietnam and U.S. approached the contagion crisis. Within weeks of Vietnam’s first reported cases in late January, the government closed schools. The Trump administration continues to resist school shutdowns, and has even threatened to withhold federal funding from schools that don’t bring back students.

Hanoi quickly deploys tests to anyone suspected of exposure to the virus, while the U.S. continues to face testing shortcomings. Danang’s authorities shut down two hospitals where two victims visited and ordered patients, medical staff, caregivers and family members -- about 8,800 people in total -- to be quarantined for 14 days at centralized bases, hospitals and homes, according to the city’s health department. A third hospital also was closed.

Vietnam has some key advantages the U.S. doesn’t in combating the virus. The Communist Party-controlled government dominates a society with a culture of collectivism, and its tough measures, like willingness to put in place lockdowns when needed, has been met with little resistance from the population.

This comes despite the fact that its quarantine regime is uncompromising and one of the strictest in the region. The government has placed Vietnamese and even foreigners seen at high risk of infection into isolation, sometimes at remote military camps.

Still, an edge Vietnam has over the U.S. is the consistent message it has sent to the public about combating the virus, said Dr. Todd Pollack, an infectious disease specialist with the Harvard Medical School Partnership for Health Advancement in Vietnam.

The government’s communications campaign includes posters in residential and office complexes, text messages, an app to help Vietnamese trace cases near them, regular updates on the Ministry of Health’s website and even a pop song encouraging hand-washing and social distancing.

Helping the country fight the virus has been the memory of past epidemics. The SARS outbreak in 2003 during killed five people in Vietnam and the bird flu led to 52 deaths in repeated outbreaks between 2004 and 2008.

The country is also currently coping with a diphtheria outbreak that has caused three deaths, leading the government to isolate 700 people in a village in the coffee-growing Central Highlands province of Dak Lak.

Vietnam’s aggressive anti-virus measures have come at a cost: Almost 31 million workers have experienced job losses or pay cuts amid the restrictions. Vietnam’s economy could grow 3% to 4% this year -- half the official target of 6.8%, according to a government advisory council.

Meanwhile, the government is getting pushback from some overseas-based companies as it strives to maintain its second-wave vigilance. Companies from South Korea, Vietnam’s second-largest foreign investor, are pressuring the government to lift mandatory two-week quarantines of their workers traveling to Vietnam, local media outlet reported.

Yet the country’s decisive actions may have burnished its reputation among companies seeking to diversify supply chains away from China. Some Japanese companies, with financial incentives from their government, are looking to relocate operations to Vietnam.

Taiwanese company Inventec Corp., Apple Inc.’s assembly partner for AirPods, is preparing to establish a unit in Vietnam and other suppliers of the Cupertino, California-based company may follow.

Now the government’s all-hands-on-deck counterattack is kicking in again. “We are improving our quarantine facilities to be able to isolate more people when needed,” the Ministry of Health’s Phu said.