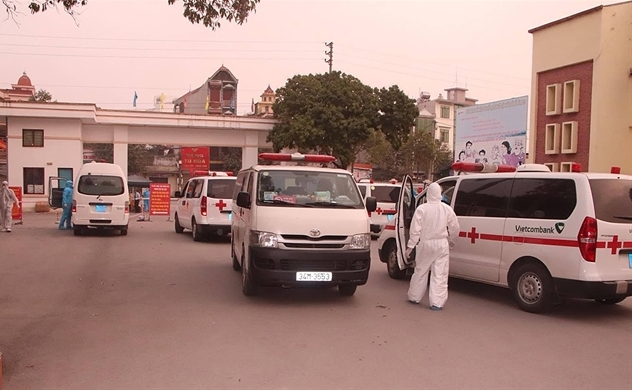 A healthcare facility in Hai Duong Province has been turned into a field hospital for treating Covid-19 patients, January 29, 2021. Photo by the Ministry of Health.

Two of the patients are in Quang Ninh. One of them is linked to the cluster in Hai Duong's Chi Linh Town and the other to the one at Quang Ninh's Van Don Airport.

All 32 remaining cases are in Hai Duong and related to Chi Linh hotspot.

Since community transmissions reemerged in the nation on Thursday after a streak of 55 clean days, Hai Duong has recorded 157 cases and Quang Ninh 20, making them the biggest Covid-19 hotspots.

Infections have then spread to the neighboring Hai Phong City and Bac Ninh Province, as well as Hanoi, which is more than one hour from Hai Duong, with 180 cases in total.

The sources of transmissions of the outbreak have not been identified, with the first patients confirmed being a man working at Van Don International Airport and a woman working at Vietnam Poyun Electronics Co. Ltd in Chi Linh Town of Hai Duong.

As the speed of transmission has been proved to be the fastest ever since the pandemic broke out in Vietnam, health experts are analyzing the virus strains on the first two patients based on the theory that it could be the U.K. variant, which is 70 percent more transmissible compared to previous strains.

With rapid contact tracing and isolation of clusters, Vietnam's government has pledged to curb the outbreak within the next week. Health authorities have so far tracked down more than 9,000 people linked to the biggest clusters in Hai Duong and Quang Ninh.

On late Friday night, Ho Chi Minh City also reported a "suspected case" who had come into close contact with a person that has been confirmed a Covid-19 patient in Hai Duong.

The person in HCMC flew into the city on Vietnam Airlines flight VN213 on January 28 that took off at Hanoi's Noi Bai Airport. Once reaching HCMC and being aware of the latest outbreak, the passenger has come to the authorities to report the situation.

So far, 12 people that had contacted this passenger have been quarantined as well and their first coronavirus tests came back negative.

By Saturday morning, Vietnam has registered 1,739 cases and 253 are active.

The pandemic has infected more than 102.5 million people worldwide, killing more than 2.2 million.