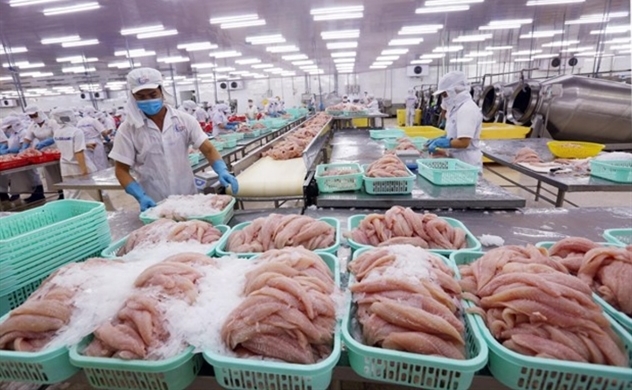 A tra fish processing factory in Can Tho city (Photo: VNA)

Cambodia's Ministry of Agriculture, Forestry, and Fisheries has decided to lift ban on four species of catfish imports from neighboring countries, including Vietnam.

Earlier, Cambodia on 8 January announced a decision to suspend imports of four catfish species, including pangasius, from neighboring countries to protect local farmers.

Following Cambodia’s move, the Vietnam Ministry of Industry and Trade met with officials from Vietnamese provinces bordering Cambodia and relevant seafood exporters to discuss the situation.

The ministry learned of Cambodia's action only after catfish cargoes exported through Khanh Binh Border Gate in Vietnam’s An Giang Province failed to get through customs clearance in Cambodia and were sent back to Vietnam.

Vietnamese Minister of Industry and Trade Tran Tuan Anh sent a letter to Cambodian Minister of Commerce Pan Sorasak to express his concern over Cambodia’s ban, saying that the measure will place negative impacts on businesses in both countries, and Cambodian customers in particular.

The import ban also goes against the spirit of trade liberalization set out by the World Trade Organization and the ASEAN Economic Community, where both countries are members.

Cambodian Minister Sorasak held a meeting with Cambodia Minister of Agriculture, Forestry, and Fisheries Veng Sakhon to discuss a reconsideration of the ban and decided to resume catfish imports from neighboring countries, including Vietnam.

According to the Vietnamese Ministry of Trade and Industry, Cambodia imports approximately $60 million worth of seafood from Vietnam annually.