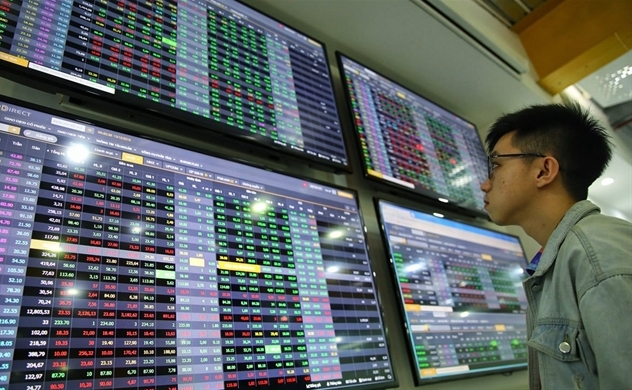 An investor looks at stock prices on the screens at a brokerage in Ho Chi Minh City. Photo by VnExpress/Quynh Tran.

The VN-Index plummeted 3.22 percent to 829.16 points Friday after official reports of the first possible local Covid-19 transmission in three months were released.

Vietnam’s benchmark index had fallen as much as 4.7 percent at 1:15 p.m., after coastal Da Nang City announced it had quarantined over 50 people who had close contact with a man tested positive for the novel coronavirus.

The Da Nang Center for Disease Control and Prevention have taken samples from more than 100 people thought to have been in contact with the 57-year old male patient in the past few days, including his family members, all of whom tested negative.

Vietnam has so far gone 99 days without an intra-community infection.

Equity market sell-offs this session were also the result of gold prices continuously hitting new peaks in the past week, causing capital to exit equity markets and enter this channel, analysts held.

By 4:10 p.m. Friday, state-owned Saigon Jewelry Company was selling its popular SJC gold at VND55.42 million ($2,395.90) per tael of 37.5 grams (1.2 ounces), up 10.8 percent over Thursday. These movements mirror surging global gold prices, driven by the latest escalation in U.S.-China tensions.

The Ho Chi Minh Stock Exchange (HoSE), on which the VN-Index is based, was a sea of red with 368 stocks losing and 32 gaining.

The VN30-Index for the market’s 30 biggest capped stocks tumbled 3.5 percent, with all of its tickers in the red.

Topping losses were CTD of construction giant Coteccons and ROS of real estate developer FLC Faros, down 7 percent and 6.9 percent respectively, both hitting their floor prices.

Private banks were some of the worst performing stocks, with VPB of VPBank, HDB of HDBank, and TCB of Techcombank dropping 5.8 percent, 4.9 percent, and 3.9 percent respectively.

Vietnam’s state-owned giants did little better, with CTG of VietinBank, BID of BIDV, and VCB of Vietcombank tumbling 4.7 percent, 4.1 percent, and 1.8 percent respectively.

Foreign investors seem to have returned to Vietnam’s market on Friday to bottom-fish, turning net buyers on all three bourses to the tune of VND273 billion ($11.8 million), with buying pressure mostly on VRE of Vincom Retail and VHM of Vinhomes.