Vietnamese grass is greener in battle against plastic straws 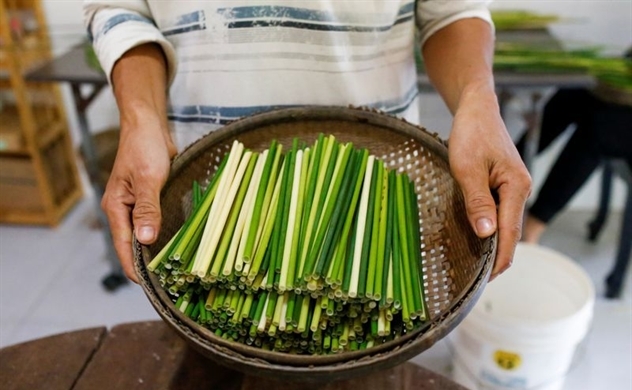 Tran Minh Tien, the owner of 3T shop, holds a basket of processed grass straws at his workshop in Long An province. Photo: Reuters

In a labour-intensive operation, hired hands work with Tien to pick the grass, cut it into uniform lengths and then clean straws before baking them in an oven or setting them out to dry in the sun for two or three days.

Tien started his business in 2017, and the company now produces about 3,000 straws a day, making a profit of $400 a month. The straws can be used for up to six months, Tien said.

But he knows his straws will not be a permanent fix given the limited supplies of the grass in Vietnam, the world's fourth-largest contributor to marine plastic pollution, according to a 2015 study by the University of Georgia.

"I came up with the grass straws as a temporary substitute to plastic straws to reduce part of the damage they cause to the environment," he said.

As demand has increased, Tien says he has to be careful about how fast he can expand his operation,

"Right from the start, I formed this idea around the fact that the harvesting can never exceed the grasses' natural reproduction rate," he said.

"Nature has to have enough time to recover as well."

"I think switching from plastic straws to grass straws is quite an innovative move, but it will take a while for everyone to become accustomed to it," said university student Le Hong Phuc, a resident of the capital, Hanoi.