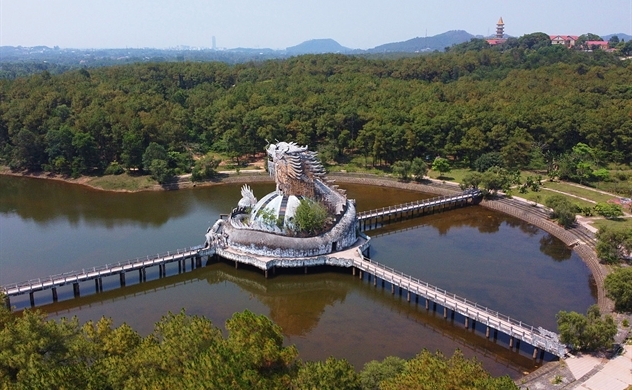 Authorities in Hue are planning to revive an abandoned dragon themed water park, described as a 'creepy destination' by international magazines, to boost tourism.

Thuy Tien Water Park lies just five miles outside Huong Thuy Town in Hue, the former imperial town in central Vietnam, beside Thuy Tien Lake. This abandoned water park hidden in the jungle has attracted many adventurers enamored with the idea of exploring something off the beaten track.

Once a popular amusement park, it is now a jungle of graffiti-covered waterslides, shattered aquariums, and murky pools that would make visitors feel they had just survived an apocalypse.

Funded by state-owned enterprise Hue Capital Tourism Company, the water park opened its door in 2004 and closed down just a few months after.

In 2008, investment and trading company Haco Hue took over the project with the aim to restructure the site for eco-tourism, including restaurants, spas, accommodation, arts, a convention center, and a space for outdoor events, but later abandoned the venture.

In 2018, the U.S. news site Huffington Post listed Thuy Tien Park among the 10 most creepy destinations while British newspaper Daily Mail called it 'a curious and creepy site" ideal for backpackers to explore.