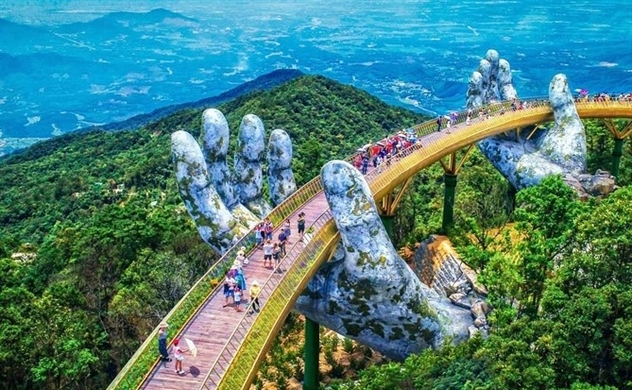 Under the agreement, a 30-second clip on famous tourist destinations in Da Nang that highlight the central coastal city’s unique values will be broadcast four times each day, from June 5-30, on the television channel for the Asia-Pacific region.

My Khe, voted one of the world's most beautiful beaches by Forbes, the Golden Bridge on Ba Na Hills and Son Tra Peninsula, home to Vietnam's largest population of the endangered red-shanked douc langurs (Pygathrix nemaeus) and unique festivals like the world famous International Fireworks Festival will be featured in the video.

The broadcast is expected to boost the image of Da Nang among a wider foreign audience and revive the city’s tourism industry, which has been hit hard by Covid-19 pandemic.

Da Nang aims to welcome 9.8 million visitors in 2020, a year-on-year increase of 12.7 percent. It welcomed 8.69 million holidaymakers last year, including nearly 3.5 million foreigners, up 30.7 percent from a year ago.

While Vietnam eased its social distancing measures on April 23 and most tourist destinations have reopened since, the country remains closed to foreigners entry, except for special cases, and has suspended international commercial fights as parts to contain the Covid-19 pandemic.

The country is seeking measures to revive the hit-hard tourism industry and planning to partially reopen doors to safe destinations that have had no new Covid-19 cases for at least 30 days.

Tokyo, Seoul, mainland China's Guangzou City, Taiwan and Laos are among Asian destinations being considered for the early reopening of international flights, the government said Wednesday.

Due to border closures and flight suspensions, Vietnam's number of foreign visitors in the first five months was 3.73 million, a 48.8 percent year-on-year decline.

The country has gone nearly two months without community transmission of the disease.