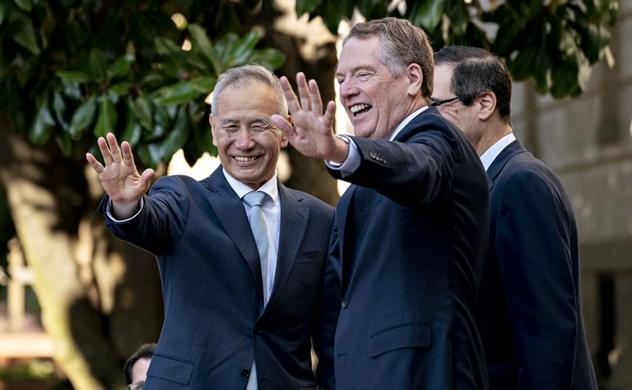 Liu He and Robert Lighthizer in Oct. 2019. Photographer: Andrew Harrer/Bloomberg

Top U.S. and China’s trade officials pledged to create the most favorable conditions for the implementation of the bilateral trade deal and cooperate on the economy and public health.

“Both sides agreed that good progress is being made on creating the governmental infrastructures necessary to make the agreement a success,” according to an emailed statement after the call from the USTR. “In spite of the current global health emergency, both countries fully expect to meet their obligations under the agreement in a timely manner.”

The phone call was the first time Liu and Lighthizer have officially spoken about the agreement since it was signed in January, just before the global coronavirus pandemic hit the world’s two biggest economies and upended global supply chains. The deal called for Liu and Lighthizer to talk every six months.

President Donald Trump told reporters at the White House on Wednesday that he’d be able to report in the next week or two if he’s happy with how the trade deal is progressing.

According to the text of the agreement signed earlier this year, China has agreed to buy an additional $200 billion in U.S. goods and services over two years compared with 2017’s level.

The purchases so far have been behind the pace needed to reach the target of the first year’s $76.7 billion increase, as goods imports from the U.S. declined by 5.9% in the first four months of 2020 from a year ago due to the coronavirus outbreak. Given that imports in 2019 were smaller than 2017, the pressure to catch up is mounting.

Relations between the U.S. and China have deteriorated further since America became one of the countries hardest hit by the coronavirus.

Trump has blamed China for misleading the world about the scale and risk of the disease, and even threatened more tariffs as punishment. China’s foreign ministry has in turn accused some U.S. officials of trying “to shift their own responsibility for their poor handling of the epidemic to others.”