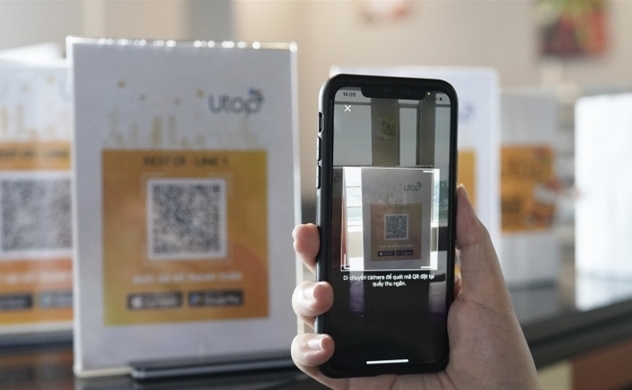 A customer scans a QR code to pay at a restaurant in Hanoi. Photo by VnExpress/Luu Quy

It has been months since Hai Van last checked her purse since she makes almost all payments by scanning QR codes with her phone.

The media company in Hanoi’s Cau Giay District says: "Whether it is having breakfast and lunch at the office, making supermarket trips in the evening or hanging out with friends at a cafe, QR payments are readily available and the deductions are made directly from my e-wallet.

"Occasionally I have to transfer money or pay cash when making online purchases. But other than that, most transactions are done through scanning codes."

This began unexpectedly over a year ago amid Covid-19.

"Once, I was buying from a street vendor without any loose change, and the lady offered a QR code to pay," she says.

Without a purse with cash and cards, her handbag’s weight has reduced in half.

"I am more worried about running out of phone battery than forgetting my purse."

The Tam, owner of a grocery store in Vinh Phuc Province, has also grown accustomed to receiving payments through online bank transfer instead of cash.

For over a year his store has had a QR code displayed in the most prominent place with the sign "QR Payment Accepted."

He says: "Customers in the village often do not carry cash. Rather than buy at another shop on credit, they gradually got into the habit of coming to mine for QR payment.

"Gone are the days when I had to count money and give back change... all there is to do now is check the numbers."

Now almost half of all transactions at his store are done by scanning codes.

After starting to gain popularity through e-wallet apps such as VNPay, MoMo and Viettel Money, QR codes are now directly integrated into bank apps.

Last year, Napas set up VietQR, simplifying this process and allowing customers of any bank in the system to transfer money to another bank just by scanning.

In the first half of this year, the number and value of transactions via mobile phones increased by 98.3% and 84.3%.

According to statistics from the Ministry of Information and Communications, the country has 81.4 million mobile Internet subscribers, an imperative for using QR codes.

But many experts say full potential has yet to be achieved.

In The Tam’s case, seniors and children, a major demographic among his grocery store customers, are often unable to use QR codes due to the need for a smartphone linked to a bank account.

Not everyone in the countryside even among other age groups has these two readily available, he says.

His store has encountered payment errors on numerous occasions due to an unstable Internet connection, he says.

"Just one wrong transaction and I might have to retrace the whole thing, which takes a long time."

Hoang Quynh, an office worker in Ho Chi Minh City who used to have three or four e-wallets with QR scanning facility but has cut down to one, says: "Sometimes stores would have an array of codes but I still cannot pay unless it includes the provider of my application. I wish there was a common platform, one app, that can scan QR codes from any payment service."