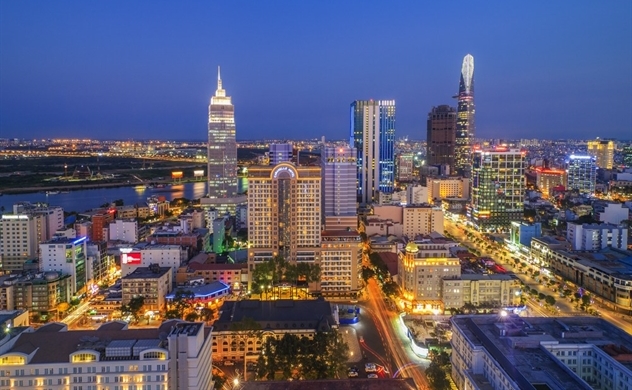 Most of real estate sectors have experienced the most special quarter in decades with the impact of the COVID-19 pandemic, according to Vietnam Real Estate Market Research Report released by Colliers Vietnam.

The country’s GDP of the third quarter of 2021 decreased by 6.17%, the biggest decrease since Vietnam conducted GDP measurement. Meanwhile, the consumer price index increased by 0.93% compared to the previous quarter and by 2.51% over the same period last year.

Foreign investment capital as of September 20, 2021 reached $22.15 billion, up 4.4% over the same period last year, a positive signal in the context of general difficulties.

The rental price of the office segment in Ho Chi Minh City remained relatively stable while the occupancy rate decreased by 4% compared to the previous quarter. There was no new supply, Colliers Vietnam said in the report.

“We have just experienced the most special quarter in decades with the impact of the Covid-19 pandemic. Besides severe impact on the market, the pandemic is creating new trends in real estate. We hope this report will help those interested in the Vietnam real estate market with  objective evidence, looking into the future”, said Mr. David Jackson, CEO of Colliers Vietnam.

The average asking price in the serviced apartment segment in Ho Chi Minh City dropped by 30% while occupancy rates also decreased by 10% and 20% respectively quarter-on-quarter in Grade A and Grade B.

Certain units Of Service households have been temporarily converted to serve the purpose of isolation to control the COVID-19 pandemic. The situation in Hanoi is similar with occupancy rate dropped less than HCMC, about 15-25% due to the better pandemic situation in Hanoi.

The number of transactions in the apartment segment in Ho Chi Minh City and Hanoi both decreased sharply because of the pandemic, the investors all over the world in principle could not access the projects in the Vietnam market.

With the landed house segment, shophouses seem less attractive to investors with the pandemic's impact on the retail industry and the new rise of e-commerce. Many large developers in Ho Chi Minh City also tend to look to neighboring areas such as in Binh Duong or Dong Nai.

The Hanoi market recorded a decrease in the number of transactions and most of it took place on the secondary market. Ha Dong is the leading area in terms of supply.

The industrial real estate rental prices in Ho Chi Minh City are still at an average of 175 USD/m2/lease term, unchanged compared to the first 6 months of 2021. The occupancy rate is still high, reaching 85%.

“The Vietnamese Government has shown us once again how to implement strict measures to deal with a crisis like COVID and as we have now passed the most stressful period of the pandemic, I look to the authorities to continue with more supportive policies to remove difficulties for real estate developers and trading exchanges, clearing up the "bottlenecks" of the market so that real estate activities can become more active again,” commented Mr. Peter Dinning, Chairman of Colliers Vietnam.

It is expected that in the near future, Ho Chi Minh City will have 5 more industrial parks with an operating area of about 1,700 hectares and most of them are concentrated in Binh Chanh. The average asking price in Hanoi is averaging 140 USD/m2/lease term, but the occupancy rate is higher, reaching about 90%. Meanwhile, the average asking price in Da Nang is 90 USD/m2/term and the occupancy rate is around 85%.