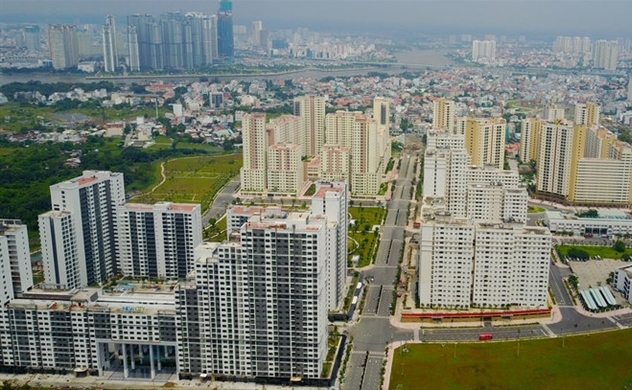 Affordable housing in Hanoi and HCMC is out of reach for most citizens, mainly because of dwindling supply and rising prices.

When he moved to Hanoi 13 years ago, Tran Thanh Ha nursed a common enough dream that he would one day own an apartment in the capital city.

Today, he realizes this is next to impossible.

The 33-year old graphic designer with a monthly income of around VND25 million ($1,080) has been able to save about VND700 million since his early twenties, but is still 50 percent away from the cheapest apartment in his favorite project, which is in the eastern district of Long Bien.

"With one child and another on the way, it is unlikely that my wife and I will be able to acquire the apartment for at least another 10 years. By that time the price will have surged to another absurd level."

Ha is one of many people in Vietnam’s major cities who are seeing their dream of home ownership slip away as prices increase every year and supply of affordable housing has almost disappeared from the market. Affordable apartments are those that are priced under VND20 million per square meter, according to the Ministry of Construction.

A recent report of the ministry says the demand for houses and apartments in the mid and high range only accounts for 20-30 percent, while the remaining 70-80 percent is for affordable housing.

The ministry report says residential property prices are "bloated, volatile and out of reach of most people" due to the lack of funding for social housing programs. It also says there is no channel for mobilizing long-term investment for these programs.

Do Thu Hang, director of advisory services at real estate consultancy firm Savills Hanoi, said that the capital city is witnessing high residential pricing that far exceeds the income of most people, especially the young.

Data from the Ho Chi Minh City Real Estate Association (HoREA) shows that with a mid-priced apartment in Ho Chi Minh City costing around VND2.5 billion, it would take a family that can save VND100 million a year over two decades to acquire the unit.

Le Hoang Chau, chairman of the association, said that a sharp decline in supply in the 2018-2020 period has made it more challenging for low-income people to afford a house.

Other industry insiders say that most small apartments of 45-50 square meters are being sold for VND1.5-1.7 billion, 50-70 percent higher than five years ago.

This means that an apartment under VND1 billion has now become a thing of the past.

Nguyen Van Dinh, deputy chairman of VNREA, said that in the last two years, very few new apartment projects have been approved in Ho Chi Minh City, this has meant that the affordable segment barely exists in the market despite large demand.

Obstacles in acquiring permits have been the main roadblock for real estate developers. From 106 housing projects approved in 2016, the figure fell to 16 last year and 12 in the first six months of this year, according to HoREA.

There is a lack of transparency in the approval of projects that has left hundreds of projects struggling to acquire permits, it added.

At an October 30 meeting, Deputy Construction Minister Le Quang Hung said his ministry was working on policies to ensure that the majority of the nation's workforce, in the middle income group, have the opportunity to buy an apartment.

The ministry has already proposed several measures to boost the supply of affordable apartments in Hanoi and HCMC. These include a 50 percent discount on land fees and preferential interest rates of 7-8 percent per annum for social housing projects.

While apartments are currently required to have a minimum area of 45 square meters, the ministry is considering scrapping this requirement so smaller, cheaper apartments can be built.

The HoREA, meanwhile, has proposed that the government provides credit support to first-time homebuyers as well as incentive tax policies for development of affordable housing.

As authorities try to find solutions to the housing problem, Ha and his wife are looking for another rented apartment in Hanoi to welcome a new baby, the only residential option for them in the increasingly crowded city.

"Without an inheritance from parents, home ownership in Vietnam is near impossible for people like me."