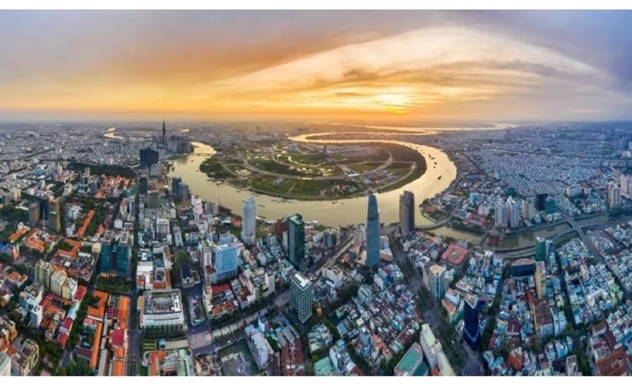 Ho Chi Minh City from above

In the 2018-2020 period, money collected from land auctions increased by 67 percent.

The total collections were VND200 trillion, which accounted for a large proportion of total asset auctions, according to the Ministry of Justice (MOJ).

MOJ said after nearly five years of implementing the Law on Asset Auction, asset auction organizations have held many auctions for land-use rights, collecting large amounts of money for the State budget, thus making a great contribution to the local economy.

No significant problems have been detected in the legal regulations on auction orders and procedures.

Implementing the Prime Minister's direction on studying and amending policies and laws on land auctions to ensure publicity, transparency and efficiency after the controversial Thu Thiem land auction case, MOJ submitted a report on the results of checking regulations on asset auctions and related laws.

The Land Law and Decrees 43/2014 and 45/2014 specify the method of determining starting prices for land auctions. Tge starting prices of land-use rights therefore is not covered by the Law on Asset Auctions.

The conditions and requirements on financial capability of enterprises participating in land-use right auctions to implement investment projects are stipulated and implemented according to laws on land, and they are also not covered by the Law on Asset Auctions.

Under the law, auction participants have to pay in advance money equal to 5-20 percent of the starting prices of the auctioned assets.

Specific levels will be determined after negotiations between those who have assets for auctions and asset-auctioning organizations. If  the deposit money is raised to overly high levels, few businesses would be able to satisfy the requirements to participate in auctions, which would pose risks of collusion and the lowering of prices by tricks.

Regarding the auctions of four land plots in Thu Thiem, Tan Hoang Minh and Binh Minh Investment Development and Trade have withdrawn interest. Meanwhile, the other two enterprises, Dream Republic JSC and Sheen Mega, which won auctions to buy land plots at VND3,82 trillion and VND4 trillion, respectively, still have not paid money.