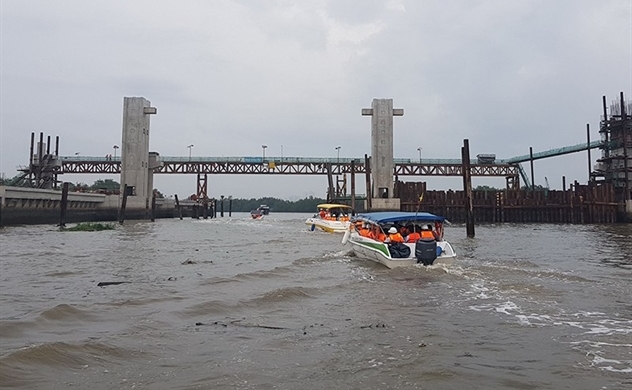 Some 77 percent of the massive anti-flooding project in the city has been completed, Director of Trungnam Group Nguyen Tam Tien told city leaders on weekend.

Chairman of the municipal People’s Committee Nguyen Thanh Phong , his deputy Vo Van Hoan and leaders of state competent agencies toured to the construction site to observe the progress of the project and worked with the project developer , Trungnam Group, upon hiccups along with way.

Director Tien affirmed that if the hindrance was cleared in June, the group will speed up to put the project into operation in October to welcome the city Party Congress.

Systems of culvert have been basically finished; respectively, Ben Nghe, Tan Thuan, Phu Xuan, Muong Chuoi , and Cay Kho. Apart from these culverts, the management center and system for supervisory control and data acquisition (SCADA) has been piloting.

Chairman Phong said at the working session that city dwellers as well as city leaders pay much attention to the project; the developer should speed up to operate it before October to welcome the city Party Congress.

Regarding site clearance, he requested the chairman of Nha Be District, where some households have not agreed to move, to work with relevant agencies to persuade people to live in other places.

Mr. Phong concluded all related agencies are determined in removing obstruction along the way, the project will be finished as per schedule, or else the city will find it hard to tackle flooding in approaching rainy season.