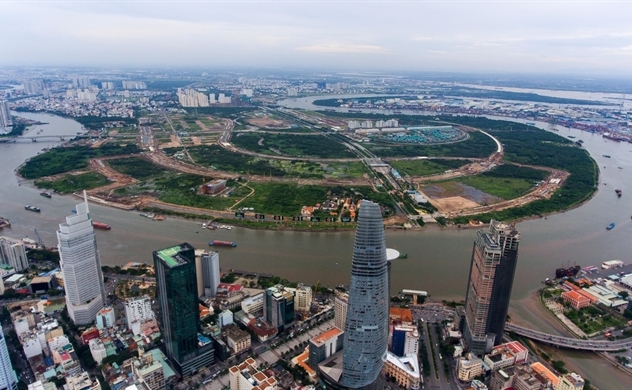 The new urban area on the Thu Thiem peninsula in HCM City’s District 2. An auction is set to be held for the use of nine land plots here.

The auction will be organised by the city’s Land Fund Development Centre, which is working with the Thu Thiem area management to map the nine lots for auctioning, according to the Department of Natural Resources and Environment.

The parcels, in a highly developed commercial hub, are on the city’s list of major projects soliciting investments.

To take part in the auction, bidders need to pay a deposit of 20 per cent into a bank account. The department said bank guarantees would not be accepted.

They must be in real estate, use the land as stipulated in zoning plans and purpose, and demonstrate the capability to develop their project in harmony with the surroundings.

Nguyen Toan Thang, director of the Department of Natural Resources and Environment, said the auction would be held publicly, with the city directly apprising bidders about the starting prices to ensure transparency.

Nguyen The Minh, head of the Thu Thiem new urban area management, said the city had sought the Government’s approval to use the money from the auctions to repay loans and loan interest worth VND2.873 trillion ($123.63 million), and pay for land compensation and construction of infrastructure in the new urban area worth a total of VND 26.32 trillion.

“The city should have special payment methods to support investors.”

Nguyen The Minh, head of the management board of the new urban area, said the Government Inspectorate had concluded that 61 land lots would need to be auctioned.

The urban area spreads over 657ha with nearly 30 per cent of the land meant for commercial purposes. The rest is for public services including a central square, riverside park and children’s playground.

Approved by the Government in 1996, the proposed financial district and mixed-use urban area is expected to become the largest inner-city development in Southeast Asia.

Acquiring all the required lands and clearing them have taken more than 10 years, with nearly 15,000 households being resettled.

Many local residents had filed complaints and lawsuits against violations by authorities, which delayed the ambitious project.