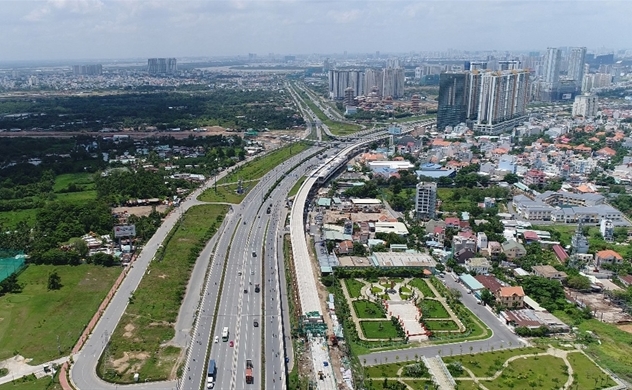 Construction of the first metro route in Ho Chi Minh City has boosted residential prices in its vicinity to 25-75 percent higher than launching prices.

A recent report by real estate consultancy CBRE said that ever since construction of Metro Line 1 began in 2012, many residential and retail developments began adjacent to the route, particularly along the Hanoi Highway in District 2’s Thao Dien, Binh An and An Phu wards.

Residential sales prices in District 2 increased by an average of 7.3 percent per year for the high-end segment since 2015, well beyond the citywide average, it added.

The CBRE report expects an active rental market for residential properties along the metro line as its construction nears completion.

Metro Line 1, or the Ben Thanh – Suoi Tien Metro Line, is a major transportation project aiming to ease traffic congestion and improve connectivity in the southern metropolis of 13 million people.

Spanning 19.7 kilometers between Districts 1 and 9, the metro route will link the city’s downtown area with a new independent administrative entity dubbed "The Eastern City," a merger of Districts 2, 9 and Thu Duc that local authorities have planned.

"End-users and buy-to-let investors are advised to purchase residential units in developments located along metro lines within The Eastern City due to the better connectivity they offer to other areas within the city and to HCMC’s central business districts," said Dung Duong, senior director of CBRE Vietnam.