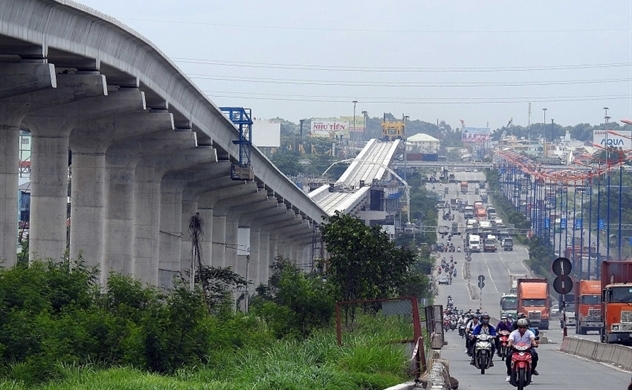 The metro line No.1 is under construction and is scheduled for completion in 2021. Photo: VIR

The city government asked the Department of Planning and Investment to proceed the pre-feasibility study report of metro line no.5 with the total investment capital estimated at $1.66 billion.

The project is expected to start construction in 2025-2029 and come into operation in 2030, stretching from Bay Hien crossroads in Tan Binh District to Saigon Bridge in Binh Thanh District.

According to the study report by Spanish IDOM consulting company, the metro line no.5 runs along Hoang Van Thu, Phan Dang Luu, Bach Dang, and Dien Bien Phu streets and connects with other metro lines in the city.

The 8.9-kilometer long route comprises 8.9 kilometers underground and 1.43 kilometers above the ground, eight stations including seven beneath the ground and one on the ground.

The project will use building technology basically compatible with that of the first metro line Ben Thanh-Suoi Tien.

According to plan, HCMC has eight metro lines with a total length of 220 kilometers and a total investment capital of US$25 billion.

Currently, the first metro line Ben Thanh-Suoi Tien and second one Ben Thanh-Tham Luong have been implemented from ODA funds and preferential loans.

Ho Chi Minh City plans to build a total of eight metro lines, one tramway line, and two monorail lines, but currently only Metro Line No.1 between Ben Thanh and Suoi Tien is under construction and is scheduled for completion in 2021.

Recently, the HCMC People’s Committee has proposed the Ministry of Planning and Investment to consider and choose a proposal to build metro line 3A Ben Thanh-Tan Kien with the total capital of nearly VND68 trillion ($$3 billion)  to submit to the Prime Minister for approval.