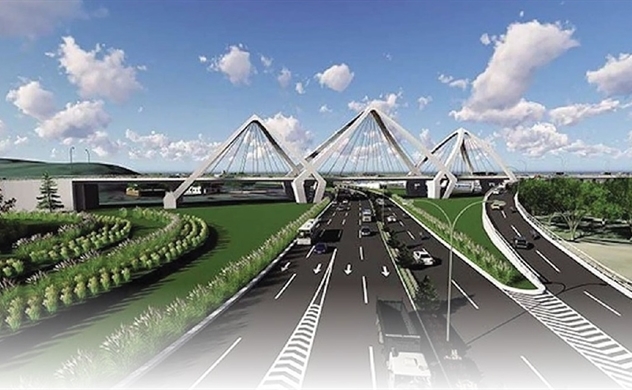 Hanoi will start Ring Road No. 4 project in June, 2023 under a plan approved recently by Chairman of the Hanoi People’s Committee Tran Sy Thanh.

To reach the target, at least 70% of the construction site must be handed over the investor by June 2023 and the site clearance work must be finished by December 2023.

Earlier, the Party Committee of Hanoi called for ground clearance and relocation for the project of Ring Road No. 4 to be sped up.

The investment project to build Ring Road No 4 in the capital city is an important project contributing to the expansion of development space for the capital.

It will reduce population density and traffic congestion in the inner city and gradually change the economic structure of the area along the road and the suburbs. It was promulgated in Directive 16-CT/TU signed by Secretary of the municipal Party Committee Dinh Tien Dung.

The road will also strengthen connectivity and create motivation and breakthroughs in the socio-economic development of Hanoi and neighboring areas.

The workload related to site clearance and land acquisition for project construction is very large.

The Party Committee directed seven groups of tasks of raising leadership and direction of the Party committees at all levels and enlisting the support of land users, including individuals and collectives, to ensure the schedule of site clearance and construction of the project.

The Party Committee's Standing Board asked district-level Party Committees, authorities and social organisations where the road passes to organised seminars to provide information on the project and its meanings for socio-economic development.

The standing board also unified policies on compensation, support, resettlement and site clearance to maximise the legal rights and interests of people whose land is recovered, according to regulations, as well as to mobilise people to comply with the policy on land recovery.

The relevant offices were asked to strengthen inspection and supervision of the implementation of the Party's guidelines and State's policies and laws on population management, planning, land, construction, compensation and resettlement.

The Party Committees of Ha Dong, Soc Son, Me Linh, Dan Phuong, Hoai Duc, Thanh Oai and Thuong Tin have to set up working teams serving for the project.

Each locality needs to clearly define the roadmap and completion time of the site clearance and ensure the interests of the State, enterprises and people.

The heads of district party committees are responsible for not completing the site clearance schedule, affecting the overall progress of the project.

The district leaders must promptly propose and report to the municipal People's Committee to solve problems and difficulties in site clearance.

Regarding the specific progress, the districts must complete the investment in building the technical infrastructure of the resettlement area in service of site clearance by the second quarter of next year.