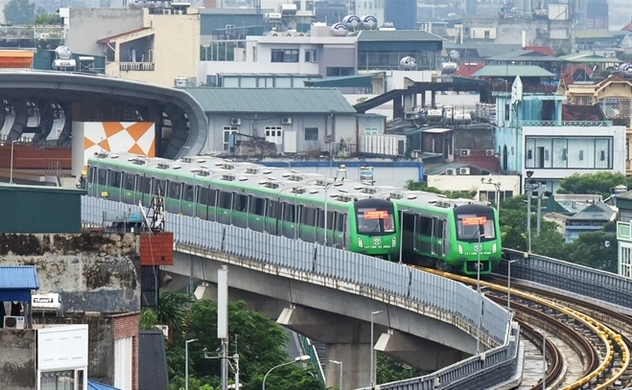 Two Cat Linh-Ha Dong trains leave the station in Hanoi during a trial run in September 2018. Photo by VnExpress/Giang Huy.

Authorities in Hanoi have submitted a proposal to the government to invest over VND65.4 trillion ($2.8 billion) in a 39-kilometer-long metro line.

This is one of eight metro projects approved by Prime Minister Nguyen Xuan Phuc with a vision toward 2030 to improve the city's public transportation system and ease traffic congestion in the capital, home to 7.5 million people.

There will be 21 stations, six underground and 15 elevated. After passing underground through Van Cao, Lieu Giai, Nguyen Chi Thanh, Tran Duy Hung and Ring Road 3, it would run along the elevated section from Thang Long Boulevard.

Hanoi authorities expect to deploy 25 to 40 trains of four to six carriages each. These could run at speeds of 120 kph above ground and 90 kph underground.

Construction on the metro line is scheduled to start in 2022, and the line be put into operation in 2026.

However, only the Cat Linh-Ha Dong line and Nhon-Hanoi Railway Station are near complete. The Cat Linh–Ha Dong route is in the final stage of safety evaluation, though a deadline for commercial operation has not been set, with test runs for the second metro line scheduled for the end of the year.

However, travel restrictions caused by the Covid-19 pandemic have hindered foreign experts from entering Vietnam, affecting the progress of both metro line projects.