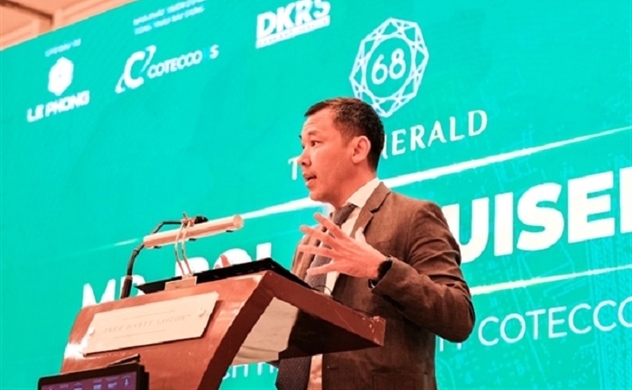 Mr. Bolat Duisenov - Chairman of the Board of Directors of Coteccons. Photo: D.V.

In order to become the developer of the project, this unit has signed a collaboration agreement with Le Phong Group, the investor in The Emerald 68 project (Vinh Phu Ward, Thuan An District, Binh Duong Province), according to a representative of Coteccons.

Together, Le Phong Group and Coteccons invested almost VND 2,000 billion to construct The Emerald 68 apartment complex on a plot of land that was close to 8,000 m2, with two blocks, each with 39 stories, and three basements. Nearly 800 flats range in size from 35 to 90 m2 and include one to three bedrooms.

In the past, Coteccons was a name connected to the high-end section of several well-known projects, including Landmark 81, The MarQ, and Masteri Thao Dien  left several traces on Ho Chi Minh City's real estate market.

In a conversation with Nhip Cau Dau Tu, Mr. Bolat Duisenov, Chairman of the Board of Directors of Coteccons, stated that his organization is extremely proud to work with and support Le Phong in order to build homes for those who want to settle down in Binh Duong.

The progress of the project is one of the measures for customers to see, evaluate, trust, and choose apartment products, according to Mr. Bui Nguon Phong, Chairman of the Board of Directors and General Director of Le Phong Group.

This business also understands the value of investing in design and utilities. The project's businesses will work hard to finish on schedule and turn over the flats in the first quarter of 2025.