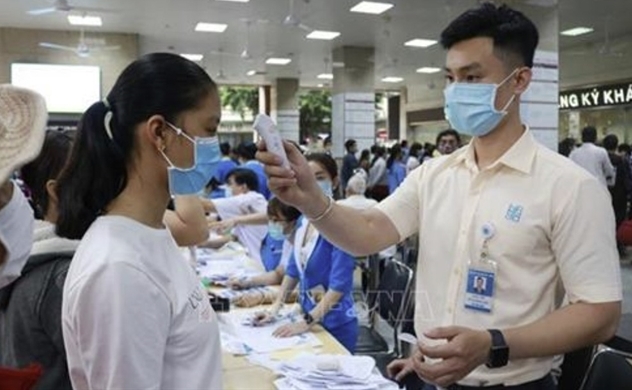 Several localities in Southern region of Vietnam have called enterprises to apply on-site sleepovers to maintain productions while preventing the spread of novel coronavirus.

On Thursday morning, Prime Minister Pham Minh Chinh, who chaired an online meeting with 27 southern provinces on COVID-19 pandemic prevention, called the localities to have measured to protect people's health while maintain production for the dual goals set by the Government.

Enterprises that do not satisfy the requirements should halt productions, according to instruction of Deputy Prime Minister Vu Duc Dam while working with the city to prevent the pandemic.

In addition, Long An strictly controls all vehicles and people traveling between the province and neighboring provinces including HCM City, Tay Ninh, Tien Giang, and Dong Thap.

Long An also requested enterprises in the neighboring localities to arranged on-site sleepovers for workers who are permanent residents of Long An.

Under the broad order of on-site sleepovers, there is possibility of supply chain disruption when several factories had to halt productions since they could not meet the requirements from the Government.

The Pouyuen Vietnam, the biggest employer in Ho Chi Minh City, had to suspend operation 10 days beginning July 14 since it failed to arrange on-site sleepovers for its workers. The Taiwanese footwear producer employs over 56,000 workers.

Samsung Electronics HCMC CE Complex and several firms with factories in the Saigon Hi-Tech Park had to suspend operations for the same reason. All factories in the park was told to temporarily close down until they submit plans on quarantines, accommodations for their workers to stay in their plants.