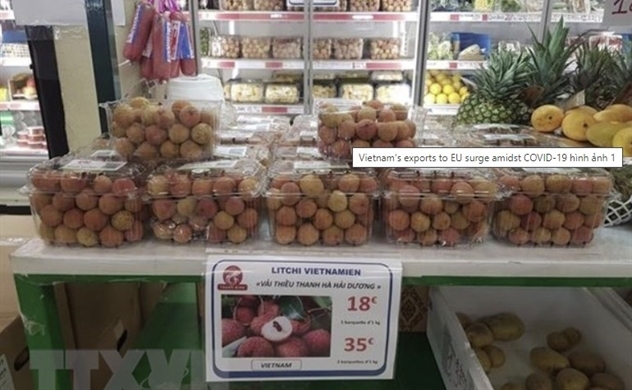 Trade in goods between Vietnam and the European Union (EU) has seen positive growth since the beginning of 2021, despite the impact of the COVID-19 pandemic.

According to statistics of the General Department of Customs, Vietnam exported 16.1 billion USD worth of goods to the EU during January-May, while importing commodities worth 6.7 billion USD from the bloc, up 20.1 percent and 16.8 percent compared to the same period last year, respectively.

With the EU-Vietnam Free Trade Agreement, Vietnam’s export to the bloc has bounced back since the end of 2020, said Tran Thanh Hai, deputy head of the Ministry of Industry and Trade’s Import-Export Department.

Thanks to the preferential tariffs under the deal, footwear exports to the bloc’s 27 member countries increased by 19.2 percent year-on-year in the first quarter of 2021.

The agreement is also creating favourable conditions for the export of Vietnamese farm produce.

In recent days, batches of fresh lychees have been shipped to the Czech Republic, Germany, France and Belgium.

Tran Van Cong, Vietnam's agricultural counsellor in Europe, said that the first batch of lychee to Belgium marked an important milestone as a special “passport” proving the production capacity of the Vietnamese agricultural sector.

According to the Vietnam Association of Seafood Exporters and Producers (VASEP), European importers have shown more interest in Vietnamese seafood suppliers given tariff advantages from the EVFTA and the stable source of raw materials. Vietnam’s seafood exports to the EU reached over 380 million USD in the first 5 months of this year, up 15 percent y-o-y, with half of which, nearly 199 million USD, coming from shrimp, up 22 percent y-o-y.