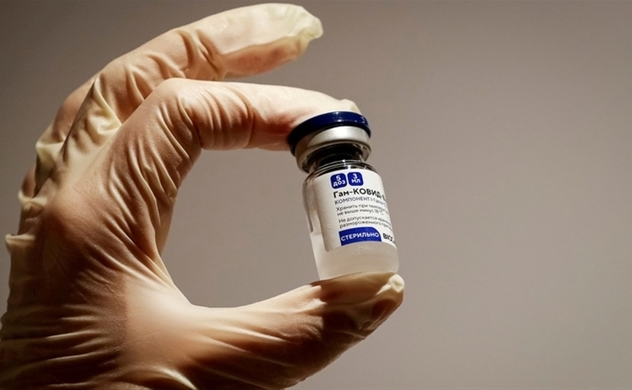 A medical specialist holds a vial of the Sputnik V vaccine against the coronavirus in a department store in Moscow, Russia, January 18, 2021. Photo by Reuters.

The government launched a $1.1-billion public fund in an effort to purchase 120 million doses of COVID-19 vaccines by the end of the year and the program received support from the community.

The fund managed by the Ministry of Finance has received contributions and donation pledges of over VND7.6 trillion ($329 million) from businesses and other donors since it was established near two weeks ago.

Companies have pledged around VND6.6 trillion ($285 million), VnExpress cited finance minister Ho Duc Phoc at the launching ceremony of the vaccine fund in Hanoi Saturday night. The business community had joined hands with the government earlier in efforts to purchase COVID-19 vaccines.

Masan Group donated VND60 billion to the fund. When the pandemic was reported, the conglomerate and its member companies donated hundreds of thousands of essential products worth VND10 billion to people staying in frontline of the battle against the virus.

According to Prime Minister Pham Minh Chinh, the fund aims to help Vietnam cope with the pandemic in the long run as people need to be vaccinated every year.

Since late April, main industrial parks in two northern provinces of Bac Giang and Bac Ninh have been urged to tackle to the highly transmissible variants that have forced many factories to either shut down or slow operations.

In response to the outbreaks at the factories, Prime Minister Chinh held an emergency online meeting with authorities nationwide on May 29, calling for Vietnamese to adopt the spirit of "fighting the pandemic like fighting the enemy."

The Vietnam Fund for Vaccination and Prevention of Coronavirus Disease 2019 is expected to play a role in financing the vaccination drive, a crucial weapon in the country's battle against pandemic and to protect manufacturing supply chains, which are a key economic engine for the communist-led country.

Vietnam recorded 92 local COVID-19 cases Monday afternoon in five localities, according to the Ministry of Health. 68 cases were recorded in Bac Giang, 14 in HCMC, seven in Lang Son, two in Ha Tinh and one in Hanoi.

The ministry confirmed 44 new locally-transmitted cases of COVID-19, raising the national caseload to 8,791.