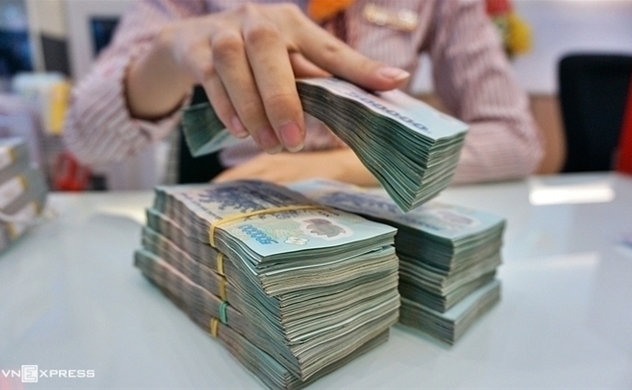 Stacks of money at a bank. Photo by VnExpress/Giang Huy

For the first time in two years, Vietnam's central has increased a series of regulatory interest rates, including deposit, rediscount and refunding rates.

The State Bank of Vietnam on Thursday made adjustments to multiple regulatory interest rates, which will take effect starting Friday.

The ceiling of deposit interest rates, with terms from 1 month to below 6 months, would be increased by 1 percentage point to 5% a year. However, for the people’s credit funds and microfinance institutions, people will receive the maximum deposit rates for the aforementioned term range at 5.5% a year.

For demand deposit and deposit with a term below 1 month, the interest rate ceiling is raised from 0.2% to 0.5% a year.

Refuding and rediscount rates both see an increase of 1 percentage point to 5% a year and 3.5% a year, respectively.

The move came after the U.S. Federal Reserve (Fed), for a third straight meeting, raised its benchmark rate by 75 basis points to battle inflation. The State Bank’s adjustments to the regulatory interest rates have signaled that the capital sources for commercial banks are no longer as cheap as they were before.

The increase in deposit interest rates, however, would directly impact banks, businesses and people's lives. A higher ceiling would allow banks, which are in need of funds, to offer higher interests for depositors. It means loan interests may increase as well.

Fund management firm Dragon Capital said that in the short-term, the stock market would see fluctuations depending on what's happening in the world.

"History has shown that investors often lose sights of long-term goals due to short-term fluctuations, and they would return to the stock market once it has recovered or is thriving... We believe investors would still follow the financial plans they have mapped out," according to a Dragon Capital report.