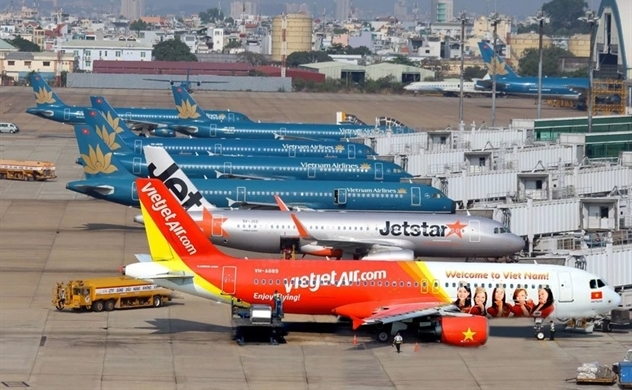 According to the Vietnam Aviation Business Association, Vietnamese airlines have beared short-term debts and due debts up to VND36 trillion ($1.6 billion) since the Covid-19 outbreak in the country.

The total revenue of Vietnamese airlines recorded a reduction of over 60 percent, equaling to VND100 trillion ($4.3 billion) in 2020. Vietnam Airlines, Vietjet Air, Bamboo Airways were estimated to suffer from the loss of VND16 trillion ($694 million).

In particular, in 2021, the third and fourth Covid-19 pandemic waves on the Lunar New Year and the summer period caused a sharp fall in revenue of the country's aviation sector. Notably, the sector recorded a decrease of 90 percent in the two recent months compared with the same period last year.

For this reason, VABA suggested expanding and performing the credit package for the domestic airlines. Particularly, the association proposed the Ministry of Planning and Investment to report the Government and National Assembly the approval to refinance loans with the total capital of VND5-6 trillion ($217-260 million) in 12 months.

Besides, the association also proposes a credit package of around VND25 trillion ($1 billion) with preferential interest rate of four percent for domestic airlines in three to five years, 50 percent reduction of service fees at passenger terminals to promote the tourism industry, consideration of corporate tax cut for businesses and aviation training establishments from now until the end of 2022.