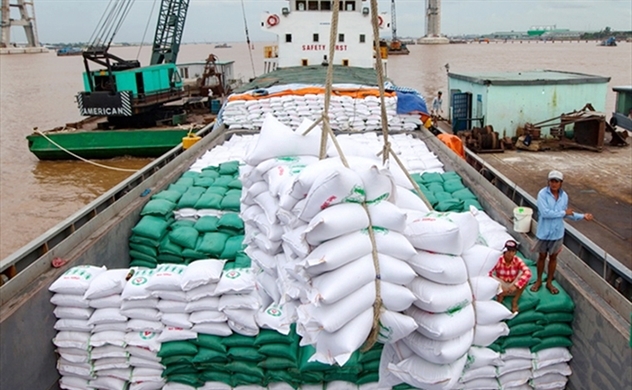 The volume of rice exported last month is estimated at 700,000 tonnes with a value of $362 million.

This brought the total volume of rice exported in the first four months of this year to 1.9 million tonnes, worth $1.01 billion, down 10.8% in volume but up 1.2% in value year-on-year.

The Agro Processing and Market Development Authority under the Ministry of Agriculture and Rural Development reported that the Philippines was the largest rice consumption market of Vietnam in the first three months of this year with 36.3% market share.

Markets with a sharp increase in rice export value in the three months were Ivory Coast with a 2.7 times rise and Australia with year-on-year growth of 66%.

A market where the rice export value fell significantly was Mozambique (down 53.5%). The average rice export price in the first three months reached $547.8 per tonne, growing 18.6% over the same period last year.

The main reason is because the winter-spring crop has been harvested, therefore, the demand for raw materials dropped, waiting for the coming summer-autumn crop.

Poor weather conditions are forecast in many parts of the world this year, resulting in a decrease in food production in many countries, and demand for rice imports expected to increase this year.

The European market is forecasted to be livelier thanks to the EU - Vietnam Free Trade Agreement (EVFTA), in which Vietnam is an important rice trading partner.

Vietnamese rice exporters have been urged to play a more active role in utilising free trade agreements (FTAs) to which Vietnam is a party to boost falling exports.

Despite the fall in volume, rice export prices jumped from January to March on account of high demand for food reserves around the world, said Tran Quoc Toan, Deputy Director of the Ministry of Industry and Trade (MoIT)’s Agency of Foreign Trade.

Rice exporters have been increasingly focusing on improving quality and traceability to meet the strict standards of markets such as the EU, the Republic of Korea (ROK), and the US, Toan said.

Toan said that in order to utilise FTAs and boost the global market share of Vietnamese rice at more competitive prices, his ministry will continue to coordinate with ministries, branches, and the Vietnam Food Association to help businesses effectively implement deals and make the most of markets such as the ROK and the EU.

The MoIT will adopt mechanisms and policies to remove technical and trade barriers, internalise international commitments, customs procedures, logistics, and credit, and focus on branding to create a foundation for rice exporters to exploit foreign markets, Toan said.

He also urged rice exporters and farmers to be more active in improving product competitiveness in terms of quality and price as well as building and protecting Vietnamese trademarks, so as to diversify markets and promote sustainable exports.