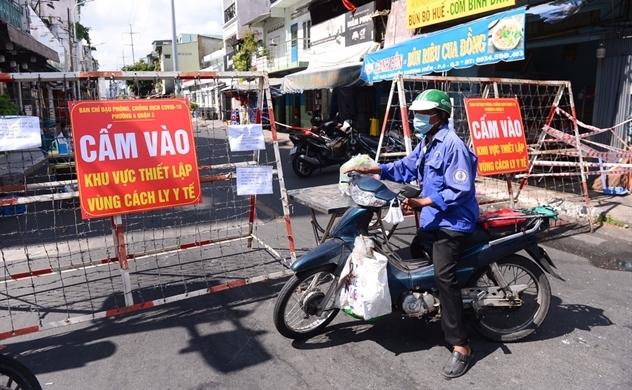 Vietnam’s largest city will begin 15 day lockdown, starting 00:00 on July 9, with the principle of every household, ward, district going into self-isolation, according to the city People's Committee.

During the campaign, citizens can still leave their house in case of necessity for buying food, medicine, but public gathering with more than two people is not recommended. The decision was made after the city recorded daily infected cases as highest nationwide.

Chairman of the City People's Committee Nguyen Thanh Phong emphasized the need to consider the fight against the pandemic as a battle, ensuring the health and safety of people's lives first.

He also directed departments to direct the suspension of public transport and travel to other provinces as the number of COVID-19 infections in the city is increasing rapidly.

This will be the second time the city impose a campaign under Directive 16 which comprises the most stringent social distancing regulations. The first was conducted in early April with 11 other localities.

The city has been put under social distancing order in line with Government Directive No.15, including closures of non-essential services and businesses for 38 days (starting on May 31), but the outbreak seems to have not improved.

Following the dispatch from Prime Minister, supermarkets in the city were packed as citizens rushed to stockpile goods after wholesale markets were closed and many items were sold out on online platforms.

The city report 617 new infections on Wednesday evening, raising total infections in the locality to 8,002 cases. Vietnam has recorded 19,234 local infections since April 27th, according to Ministry of Health.