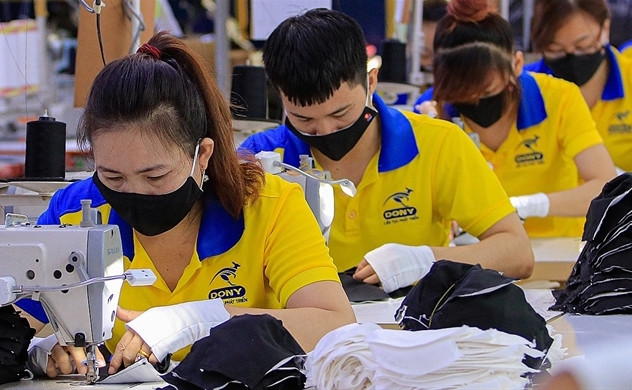 Workers at a company in HCMC’s Tan Binh producing anti-bacterial face masks for export to the Middle East. Photo by VnExpress/Nguyet Nhi

Businesses want HCMC to reopen its economy soon to ensure their survival after over three months of social distancing amid prolonged Covid-19 outbreaks.

Many enterprises have had to suspend operations, and others have adopted stay-at-work mode with higher costs.

An executive at a cashew production and export firm in HCMC’s Thu Duc District, which has been closed since mid-July, said: "If the pandemic is controlled in September, vaccination covers 70 percent (of the population), and HCMC resumes socioeconomic activities soon, we will take export orders in the fourth quarter."

If the firm is allowed to resume operations in the second half of September, it would bring 30-50 employees back to work immediately and then gradually increase the number, he said.

"Only by doing that, can we prevent a break in supply chains."

Ba Huan Corporation, a major foodstuff producer in the city, said production costs have surged 50 percent in the past three months when their workers stay at workplace, and many want to return home.

"If HCMC loosens social distancing this month, it will be a really encouraging sign," its general director, Pham Thi Huan, said.

Workers become tired and want to quit their jobs if they have to work, eat and sleep at factories for long, she said.

Truong Chi Thien, general director of another food producer, VFood, confirmed this, saying many of his workers have quit their jobs that the payroll has halved.

Meanwhile, his company is running out of raw materials, and if HCMC does not reopen starting on September 15, it would have no materials for continuing production, he said.

"If the city does not reopen soon, production chains will be broken."

He too called on HCMC to reopen in September.

Since 80 percent of his company’s workers have been vaccinated against Covid, it is ready to expand operations, he said.

HCMC authorities have said they will allow certain businesses, like those in e-commerce, logistics, medical equipment production, food, foodstuffs, petrol and oil distribution, and construction material, to resume full operations in safe areas from now to September 15 on a trial basis.