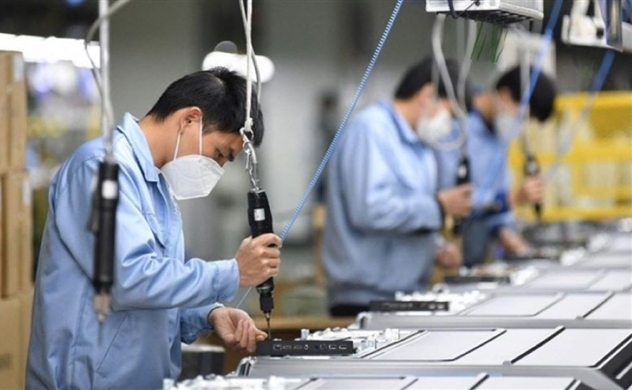 The regional minimum wage for labours is proposed to rise by six per cent from July 1, 2022. Photo nguoiduatin.vn

Eight associations with a large labour force have proposed the Government increase the regional minimum wage from January 1, 2023 instead of July 1, 2022 as per the National Wage Council's decision.

In their petition to the Prime Minister, these associations also said that in the two years of 2020-21, the COVID-19 outbreak seriously affected businesses. Postponing the regional minimum wage increase would help the businesses have time to prepare.

These associations also believe that the difficulties caused by the pandemic will not end, as workers infected with COVID-19 continue to appear and new strains of COVID-19 still threaten production.

If the wage is increased from the beginning of July, it will be difficult for businesses to prepare in time. All production, financial and order plans of the enterprises were built at the end of the previous year so they are unable to increase the selling price to cover costs. Besides that, many businesses have increased their wages since the beginning of 2021 or 2022.

The petition also states that with current difficulties, many businesses would have to cancel contracts because of unstable financial situations, reduction of workers, and suspension or reduction of production.

The National Wage Council announced on April 12 that the regional minimum wage will rise by six per cent from July 1, 2022.

Those in Region 3, or provincial cities and the districts of Bắc Ninh, Bắc Giang and Hải Dương provinces, will earn at least VNĐ3.64 million a month; and in Region 4, or the rest of the country, will receive a minimum of VNĐ3.25 million a month.

Representing employers, the Vietnam Confederation of Commerce and Industry (VCCI), has agreed with the salary adjustment, but wanted the implementation in early 2023. VCCI has proposed that the increase be about 3-5 per cent.