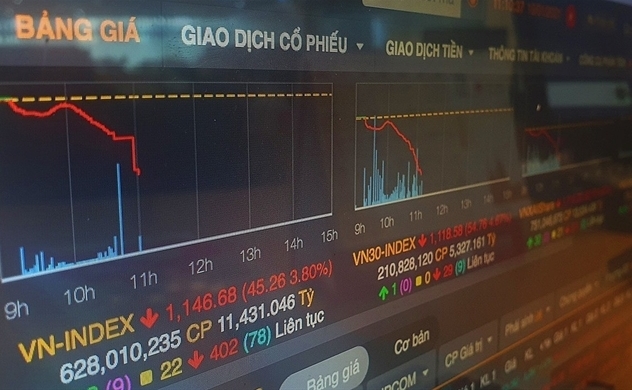 VN-Index plummets 74 points on the morning of January 19, 2021. Photo by VnExpress/Phuong Dong.

Hundreds of stocks were offloaded as investors were thrown into a state of panic selling, causing the VN-Index to plunge by a historical record of 74 points Tuesday morning.

After unsuccessfully conquering the 1,200-point mark the previous session, the VN-Index, based on the performance of stocks on the Ho Chi Minh Stock Exchange (HoSE), fell immediately into the red at its open on Tuesday.

After hovering slightly below its open of 1,191.94 in the first one and a half hour, the index suddenly began to freefall.

By 10:40 a.m., the VN-Index had lost nearly 24 points to 1,168 points, something securities firms attributed to profit-taking pressure from investors. With the sudden rise in sell orders, the HoSE trading system froze, and indexes, liquidity, and number of stocks gained and lost stood still for nearly 20 minutes.

This is the strongest single-session decline in the HoSE’s 20-year history in absolute value, and erased all accumulated gains of the VN-Index since the beginning of the year up to now. The market only had 38 stocks remaining in green, while those in the red exceeded 440.

118 stocks hit their lower limit for the trading day, the most HoSE has seen historically.

Total trading volume soared to VND16.16 trillion ($702.44 million), equivalent to an entire average trading day so far in January. VND7.74 trillion worth of these transactions belonged to stocks in the VN30 group of HoSE’s largest caps, whose index also plunged 6.25 percent.

According to the statistics of VNDirect Securities Company, blue chips such as VIC of private conglomerate Vingroup, VHM of real estate giant Vinhomes, and state-owned banking trio VCB of Vietcombank, CTG of VietinBank and BID of BIDV are the biggest drag on the VN-Index.

These five accounted for a 26.59-point drop on the VN-Index.

Foreign investors, meanwhile, seem unfazed by developments on the market, scooping up a net of VND117 billion worth of Vietnamese stocks in the morning session, picking up mostly VRE of mall operator Vincom Retail and VHM of Vinhomes, both of which are close to their floor prices as of 11:30 a.m.