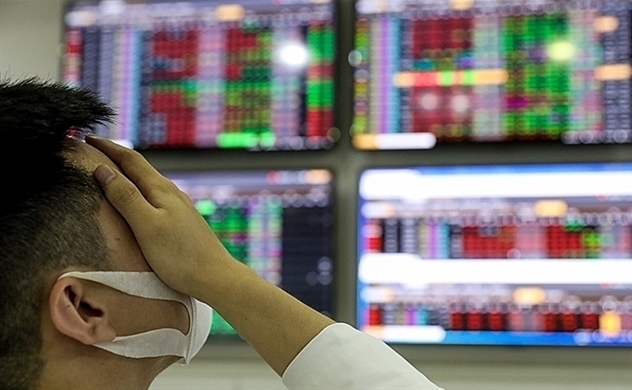 An investor looks at price lists at a securities company in Ho Chi Minh City. Photo by VnExpress/Nhu Quynh.

The magnitude of the loss came second to this year’s March 9 session when coronavirus-induced selloffs caused the benchmark index to drop 6.28 percent. The VN-Index is now at its lowest point since January 2017.

Furthermore, the stock market has not seen so big a losing session since October 10, 2001, when it dropped 6.3 percent, but that was when the Ho Chi Minh Stock Exchange (HoSE), on which the VN-Index is based, had only five stocks, and the VN-Index was hovering at just over 200 points.

Just 40 stocks gained as an overwhelming 363 lost, with as many as 193 closing at their floor prices, the lowest they could go in a trading session. Total trading volume rose nearly 15 percent over the previous session to VND4.83 trillion ($205.89 million), with order-matched transactions accounting for 66 percent.

Investors were thrown into a state of panic over two key pieces of negative information regarding the Covid-19 situation worldwide that were released during the weekend, leading to massive sell orders at the beginning of Monday’s session, said Tran Truong Manh Hieu, Head of Market Strategy at securities firm KIS Vietnam Securities.

One piece of information was that the disease seemed to be spiraling out of control in Vietnam’s key export markets such as the U.S. and EU; and the second was that U.S. Senate was deadlocked Sunday after Senate Democrats voted against passing a $1.8 trillion government stimulus package to prop up to the economy, Hieu said.

The VN30-Index for HoSE’s 30 biggest capped stocks plunged 6.06 percent this session with 27 tickers losing, all of which hit their floor prices of between 6.8 percent and 7 percent; and just two gaining.

MSN of food conglomerate Masan Group was the only ticker that kept its opening price, while EIB of private mid-sized lender Eximbank edged up 0.3 percent, and NVL of real estate developer Novaland rose 2 percent.

According to statistics compiled by securities firm VNDIRECT, the VN-Index lost 24.13 out of 43.14 points this session as a result of its 10 biggest losing stocks, all of which are in the VN30 bracket.

Meanwhile, the HNX-Index for stocks on the Hanoi Stock Exchange, Vietnam’s second main bourse for small and midcap stocks, shed 5.29 percent, and the UPCoM-Index for unlisted public companies slipped 4.57 percent.

Foreign investors were net sellers for the 30th straight session to the tune of nearly VND420 billion ($18.07 million). Selling pressure was focused on MSN of Masan Group, which kept its opening price, and HPG of leading steelmaker Hoa Phat Group, down 7 percent this session.

Hieu of KIS Vietnam Securities said that with low liquidity and foreign net sell showing no signs of stopping, the VN-Index has yet to bottom out and is likely ot continue falling in the near future.