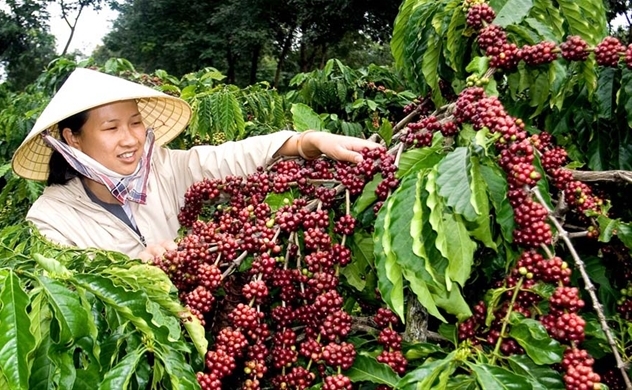 A coffee plantation in Vietnam, the largest producer of robust beans in the world: Japanese imports of robusta, mostly used in instant coffee products, are rising. Photo: danviet.vn

Vietnam, the world's biggest producer of robusta, has become the top supplier of coffee beans for Japan as consumption of instant coffee, which uses robusta, is soaring there amid the Covid-19 pandemic.

A news article on Nikkei Asian Review reported that more people are working at home during the pandemic, driving up demand for robusta coffee beans, which are mainly used to make instant coffee.

The Covid-19 pandemic has shifted coffee consumption toward home. The trend has made Vietnam, the world’s top robusta producer, Japan's top supplier of coffee beans and relegated Brazil to second place.

Japan's state of emergency, declared in early April, shuttered cafes and restaurants across the country, forcing Starbucks Coffee Japan to halt business at some 1,100 outlets. The closures dealt a heavy blow to demand for arabica beans.

In contrast, demand for robusta, a cheaper and more bitter variety used in instant coffee products, has been strong as Covid-19 restrictions keep people at home.

Demand for instant coffee has spiked. Sales of instant coffee products in the second quarter grew about 10 percent from a year earlier, according to food processor Ajinomoto AGF.

Trade data show that Vietnam was the top seller of unroasted beans to Japan for the first seven months of 2020. A total of 67,392 tonnes of unroasted beans were imported from the Southeast Asian country during the period, up 26 percent year on year.

This was the first time Japan’s imports from Vietnam outpaced those from Brazil.

The Nikkei Asian Review quoted Shiro Ozawa, an adviser with Tokyo-based specialty coffee trader Wataru & Co., as saying that Vietnam is on track to top Brazil for the entire year and that this is a historic moment.