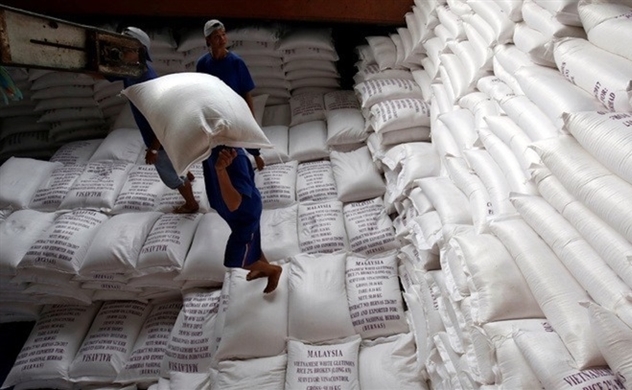 Men load rice bags to a ship for export at a rice processing factory in Vietnam's southern Mekong delta. Photo by Reuters/Kham.

Rice traders are unhappy with the sudden government ban on exports that has million dollar worth of cargo idling at ports.

When Hanoi Trade Jsc (Hapro) found out Wednesday that customs authorities had stopped clearing rice shipments, its rice cargo had already arrived at the port.

Vu Thanh Son, CEO of the company, said that he was surprised to learn about the sudden ban, which means $2 million worth of Hapro rice on its way to Philippines and Malaysia are now stuck in the Saigon Port in Ho Chi Minh City.

"Contracts have been signed and money has been transferred. The ban could result in a loss of reputation for the company and lawsuits from our partners."

Another exporter, Co May Group in southern Dong Thap Province, has had to suspend the export of four rice containers to Australia worth VND1.2 billion ($50,700), which was due this week.

"We have been preparing a month for this order. The ban will cost us a lot of human and financial resources," said a company leader who asked not be identified.

The Loc Troi Group in southern An Giang Province has also had to cancel two rice orders on the way to the port. Group Chairman Huynh Van Thon said they would have to renegotiate and do not know how the buyers will react to the news.

Prime Minister Nguyen Xuan Phuc ordered the export ban to be imposed 0 a.m. Wednesday after the government noticed an unusual 32.6 percent year-on-year upsurge in rice export value in the first two months of this year.

Exports to China surged seven times in this period, according to official figures.

Deputy Minister of Industry and Trade Tran Quoc Khanh Wednesday said that if the export surge persists in the upcoming months, Vietnam could face a domestic shortage of rice.

Rice exporters have said they agree with the ban and the need to ensure food security, but the government needed to give them a time frame to conclude their export orders to minimize losses.

Son of Hapro said that orders signed before Tuesday should be cleared for exports, while the leader of Co May proposed that exports be allowed until the end of April or early May.

The Ministry of Industry and Trade had asked the PM Wednesday to postpone implementation of the rice export suspension, citing businesses' complaints regarding its immediacy. The ministry said it would reassess the actual output of the winter-spring rice crop, the amount of rice to be exported in signed contracts and the actual amount in businesses' inventories before suggesting a solution.

The Government Office said Wednesday afternoon that the rice export ban will stay and businesses should not sign new contracts at this time.

Vietnam is the world's third largest rice exporter after India and Thailand. Last year, the country exported 6.37 million tons of rice worth $2.81 billion, with the top markets being the Philippines, Ivory Coast, Malaysia, and China.